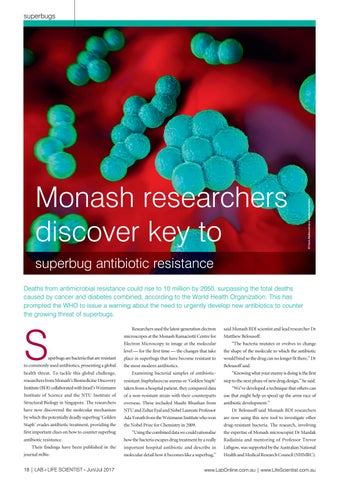 superbug antibiotic resistance Deaths from antimicrobial resistance could rise to 10 million by 2050, surpassing the total deaths caused by cancer and diabetes combined, according to the World Health Organization. This has prompted the WHO to issue a warning about the need to urgently develop new antibiotics to counter the growing threat of superbugs.

uperbugs are bacteria that are resistant

Electron Microscopy to image at the molecular

“The bacteria mutates or evolves to change

level — for the first time — the changes that take

the shape of the molecule to which the antibiotic

place in superbugs that have become resistant to

would bind so the drug can no longer fit there,” Dr

the most modern antibiotics.

“Knowing what your enemy is doing is the first

step to the next phase of new drug design,” he said.

taken from a hospital patient, they compared data

“We’ve developed a technique that others can

of a non-resistant strain with their counterparts

use that might help us speed up the arms race of

Structural Biology in Singapore. The researchers

overseas. These included Shashi Bhushan from

have now discovered the molecular mechanism

by which the potentially deadly superbug ‘Golden

Ada Yonath from the Weizmann Institute who won

are now using this new tool to investigate other

the Nobel Prize for Chemistry in 2009.

first important clues on how to counter superbug antibiotic resistance. Their findings have been published in the journal mBio.

“Using the combined data we could rationalise

how the bacteria escapes drug treatment by a really

Radjainia and mentoring of Professor Trevor

important hospital antibiotic and describe in

Lithgow, was supported by the Australian National