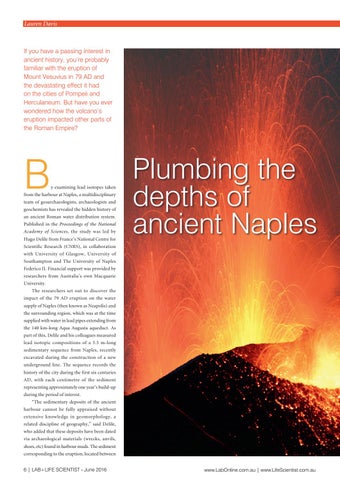 If you have a passing interest in ancient history, you’re probably familiar with the eruption of Mount Vesuvius in 79 AD and the devastating effect it had on the cities of Pompeii and Herculaneum. But have you ever wondered how the volcano’s eruption impacted other parts of the Roman Empire?

from the harbour at Naples, a multidisciplinary team of geoarchaeologists, archaeologists and geochemists has revealed the hidden history of an ancient Roman water distribution system. Published in the Proceedings of the National Academy of Sciences, the study was led by Hugo Delile from France’s National Centre for

Plumbing the depths of ancient Naples

Scientific Research (CNRS), in collaboration with University of Glasgow, University of Southampton and The University of Naples Federico II. Financial support was provided by researchers from Australia’s own Macquarie University. The researchers set out to discover the impact of the 79 AD eruption on the water supply of Naples (then known as Neapolis) and the surrounding region, which was at the time supplied with water in lead pipes extending from the 140 km-long Aqua Augusta aqueduct. As part of this, Delile and his colleagues measured lead isotopic compositions of a 5.5 m-long sedimentary sequence from Naples, recently excavated during the construction of a new underground line. The sequence records the history of the city during the first six centuries AD, with each centimetre of the sediment representing approximately one year’s build-up during the period of interest. “The sedimentary deposits of the ancient harbour cannot be fully appraised without extensive knowledge in geomorphology, a related discipline of geography,” said Delile, who added that these deposits have been dated via archaeological materials (wrecks, anvils, shoes, etc) found in harbour muds. The sediment corresponding to the eruption, located between