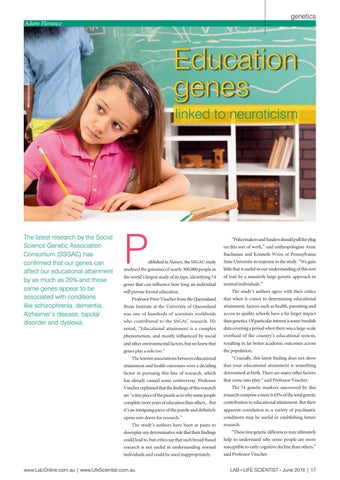 The latest research by the Social Science Genetic Association Consortium (SSGAC) has confirmed that our genes can affect our educational attainment by as much as 20% and those same genes appear to be associated with conditions like schizophrenia, dementia, Alzheimer’s disease, bipolar disorder and dyslexia.

on this sort of work,” said anthropologists Anne

ublished in Nature, the SSGAC study

State University in response to the study. “We gain

analysed the genomes of nearly 300,000 people in

little that is useful in our understanding of this sort

the world’s largest study of its type, identifying 74

of trait by a massively large genetic approach in

genes that can influence how long an individual

The study’s authors agree with their critics

Professor Peter Visscher from the Queensland

that when it comes to determining educational

Brain Institute at the University of Queensland

attainment, factors such as health, parenting and

was one of hundreds of scientists worldwide

access to quality schools have a far larger impact

who contributed to the SSGAC research. He

than genetics. Of particular interest is some Swedish

noted, “Educational attainment is a complex

data covering a period when there was a large-scale

phenomenon, and mostly influenced by social

overhaul of the country’s educational system,

and other environmental factors, but we knew that

genes play a role too.”

The known associations between educational

“Crucially, this latest finding does not show

attainment and health outcomes were a deciding

that your educational attainment is something

factor in pursuing this line of research, which

determined at birth. There are many other factors

has already caused some controversy. Professor

Visscher explained that the findings of this research

The 74 genetic markers uncovered by this

research comprise a mere 0.43% of the total genetic

complete more years of education than others... But

contribution to educational attainment. But their

it’s an intriguing piece of the puzzle and definitely

apparent correlation to a variety of psychiatric

conditions may be useful in establishing future

The study’s authors have been at pains to

downplay any determinative role that their findings

“These tiny genetic differences may ultimately

could lead to, but critics say that such broad-based

help to understand why some people are more

research is not useful in understanding normal

susceptible to early cognitive decline than others,”

individuals and could be used inappropriately.