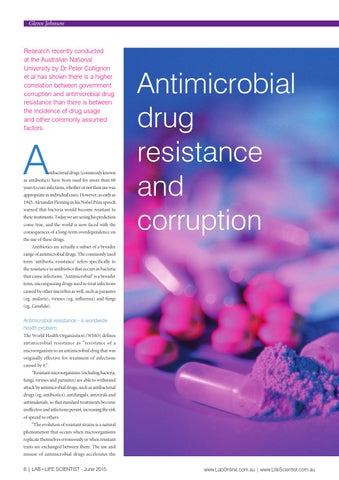 Research recently conducted at the Australian National University by Dr Peter Collignon et al has shown there is a higher correlation between government corruption and antimicrobial drug resistance than there is between the incidence of drug usage and other commonly assumed factors.

as antibiotics) have been used for more than 60 years to cure infections, whether or not their use was appropriate in individual cases. However, as early as 1945, Alexander Fleming in his Nobel Prize speech warned that bacteria would become resistant to these treatments. Today we are seeing his prediction come true, and the world is now faced with the consequences of a long-term overdependence on

the use of these drugs. Antibiotics are actually a subset of a broader range of antimicrobial drugs. The commonly used term ‘antibiotic resistance’ refers specifically to the resistance to antibiotics that occurs in bacteria that cause infections. ‘Antimicrobial’ is a broader term, encompassing drugs used to treat infections caused by other microbes as well, such as parasites (eg, malaria), viruses (eg, influenza) and fungi (eg, Candida).

Antimicrobial resistance - a worldwide health problem The World Health Organization (WHO) defines antimicrobial resistance as “resistance of a microorganism to an antimicrobial drug that was originally effective for treatment of infections caused by it”. “Resistant microorganisms (including bacteria, fungi, viruses and parasites) are able to withstand attack by antimicrobial drugs, such as antibacterial drugs (eg, antibiotics), antifungals, antivirals and antimalarials, so that standard treatments become ineffective and infections persist, increasing the risk of spread to others. “The evolution of resistant strains is a natural phenomenon that occurs when microorganisms replicate themselves erroneously or when resistant traits are exchanged between them. The use and misuse of antimicrobial drugs accelerates the