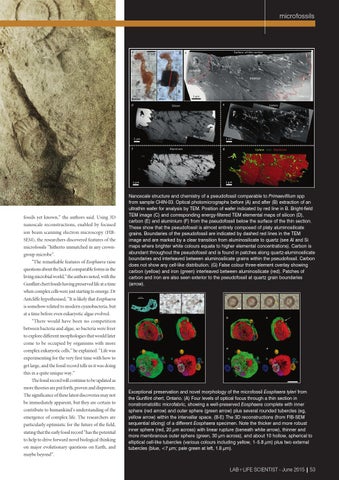 fossils yet known,” the authors said. Using 3D nanoscale reconstructions, enabled by focused ion beam scanning electron microscopy (FIBSEM), the researchers discovered features of the microfossils “hitherto unmatched in any crowngroup microbe”. “The remarkable features of Eosphaera raise questions about the lack of comparable forms in the living microbial world,” the authors noted, with the Gunflint chert fossils having preserved life at a time

when complex cells were just starting to emerge. Dr Antcliffe hypothesised, “It is likely that Eosphaera is somehow related to modern cyanobacteria, but at a time before even eukaryotic algae evolved. “There would have been no competition between bacteria and algae, so bacteria were freer to explore different morphologies that would later come to be occupied by organisms with more complex eukaryotic cells,” he explained. “Life was experimenting for the very first time with how to get large, and the fossil record tells us it was doing this in a quite unique way.” The fossil record will continue to be updated as more theories are put forth, proven and disproven. The significance of these latest discoveries may not be immediately apparent, but they are certain to contribute to humankind’s understanding of the emergence of complex life. The researchers are particularly optimistic for the future of the field, stating that the early fossil record “has the potential to help to drive forward novel biological thinking on major evolutionary questions on Earth, and