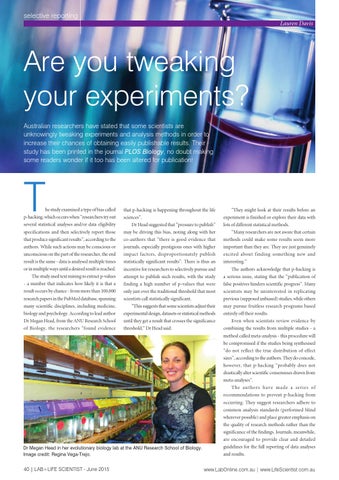 Are you tweaking your experiments? Australian researchers have stated that some scientists are unknowingly tweaking experiments and analysis methods in order to increase their chances of obtaining easily publishable results. Their study has been printed in the journal PLOS Biology, no doubt making some readers wonder if it too has been altered for publication!

he study examined a type of bias called

p-hacking, which occurs when “researchers try out

that p-hacking is happening throughout the life sciences”.

specifications and then selectively report those

may be driving this bias, noting along with her

“Many researchers are not aware that certain

that produce significant results”, according to the

co-authors that “there is good evidence that

authors. While such actions may be conscious or

journals, especially prestigious ones with higher

important than they are. They are just genuinely

unconscious on the part of the researcher, the end

excited about finding something new and

result is the same - data is analysed multiple times

statistically significant results”. There is thus an

or in multiple ways until a desired result is reached.

incentive for researchers to selectively pursue and

The authors acknowledge that p-hacking is

attempt to publish such results, with the study

a serious issue, stating that the “publication of

- a number that indicates how likely it is that a

finding a high number of p-values that were

only just over the traditional threshold that most

scientists may be uninterested in replicating

previous (supposed unbiased) studies, while others

many scientific disciplines, including medicine,

“This suggests that some scientists adjust their

biology and psychology. According to lead author

until they get a result that crosses the significance

of Biology, the researchers “found evidence

may pursue fruitless research programs based entirely off their results. Even when scientists review evidence by combining the results from multiple studies - a method called meta-analysis - this procedure will be compromised if the studies being synthesised “do not reflect the true distribution of effect sizes”, according to the authors. They do concede, however, that p-hacking “probably does not drastically alter scientific consensuses drawn from meta-analyses”. The authors have made a series of recommendations to prevent p-hacking from occurring. They suggest researchers adhere to common analysis standards (performed blind wherever possible) and place greater emphasis on the quality of research methods rather than the significance of the findings. Journals, meanwhile, are encouraged to provide clear and detailed

guidelines for the full reporting of data analyses and results.