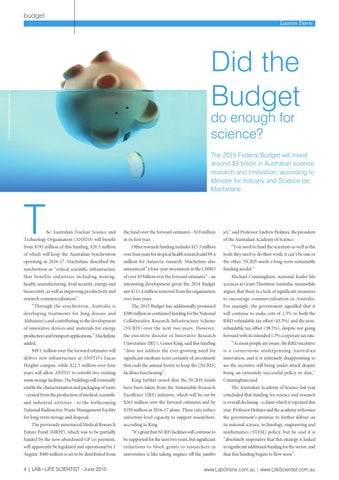 Did the Budget do enough for science?

The 2015 Federal Budget will invest around $9 billion in Australian science, research and innovation, according to Minister for Industry and Science Ian Macfarlane.

he Australian Nuclear Science and

the fund over the forward estimates - $10 million

in its first year.

of the Australian Academy of Science.

“You need to fund the scientists as well as the

of which will keep the Australian Synchrotron

over four years for tropical health research and $9.4

tools they need to do their work; it can’t be one or

operating in 2016-17. Macfarlane described the

the other. NCRIS needs a long-term sustainable

announced “a four-year investment in the CSIRO

that benefits industries including mining,

of over $3 billion over the forward estimates” - an

interesting development given the 2014 Budget

biosecurity, as well as improving productivity and

saw $111.4 million removed from the organisation

argues that there is a lack of significant measures

to encourage commercialisation in Australia.

“Through the synchrotron, Australia is

The 2015 Budget has additionally promised

For example, the government signalled that it

developing treatments for lung disease and

$300 million in continued funding for the National

will continue to make cuts of 1.5% to both the

Alzheimer’s and contributing to the development

of innovative devices and materials for energy

(NCRIS) over the next two years. However,

refundable tax offset (38.5%), despite not going

the executive director of Innovative Research

“As most people are aware, the R&amp;D incentive

$49.1 million over the forward estimates will

“does not address the ever-growing need for

is a cornerstone underpinning Australian

innovation, and it is extremely disappointing to

Heights campus, while $22.3 million over four

that ends the annual frenzy to keep the [NCRIS]

see the incentive still being under attack despite

enable the characterisation and packaging of waste

have been taken from the Sustainable Research

- created from the production of medical, scientific

Excellence (SRE) initiative, which will be cut by

concluded that funding for science and research

and industrial activities - to the forthcoming

$263 million over the forward estimates and by

is overall declining - a claim which it repeated this

for long-term storage and disposal.

the government’s promise to further deliver on

its national science, technology, engineering and

Future Fund (MRFF), which was to be partially

“It’s great that NCRIS facilities will continue to

funded by the now-abandoned GP co-payment,

be supported for the next two years, but significant

“absolutely imperative that this strategy is linked

will apparently be legislated and operational by 1

reductions to block grants to researchers in

to significant additional funding for the sector, and

August. $400 million is set to be distributed from

that this funding begins to flow soon”.