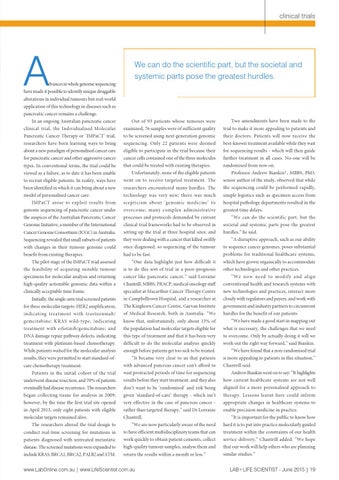 We can do the scientific part, but the societal and systemic parts pose the greatest hurdles.

have made it possible to identify unique druggable alterations in individual tumours but real-world application of this technology in diseases such as pancreatic cancer remains a challenge. In an ongoing Australian pancreatic cancer

Out of 93 patients whose tumours were

Two amendments have been made to the

examined, 76 samples were of sufficient quality

trial to make it more appealing to patients and

to be screened using next-generation genomic

their doctors. Patients will now receive the

researchers have been learning ways to bring

sequencing. Only 22 patients were deemed

best-known treatment available while they wait

about a new paradigm of personalised cancer care

eligible to participate in the trial because their

for sequencing results - which will then guide

for pancreatic cancer and other aggressive cancer

cancer cells contained one of the three molecules

further treatment in all cases. No-one will be

that could be treated with existing therapies.

randomised from now on.

viewed as a failure, as to date it has been unable

Unfortunately, none of the eligible patients

to recruit eligible patients. In reality, ways have

went on to receive targeted treatment. The

senior author of the study, observed that while

been identified in which it can bring about a new

researchers encountered many hurdles. The

the sequencing could be performed rapidly,

technology was very new; there was much

IMPaCT arose to exploit results from

scepticism about ‘genomic medicine’ to

hospital pathology departments resulted in the

genome sequencing of pancreatic cancer under

the auspices of the Australian Pancreatic Cancer

processes and protocols demanded by current

“We can do the scientific part, but the

Genome Initiative, a member of the International

clinical trial frameworks had to be observed in

setting up the trial at three hospital sites; and

they were dealing with a cancer that killed swiftly

“A disruptive approach, such as our ability

with changes in their tumour genome could

once diagnosed, so sequencing of the tumour

had to be fast.

problems for traditional healthcare systems, which have grown organically to accommodate

The pilot stage of the IMPaCT trial assessed

“Our data highlight just how difficult it

the feasibility of acquiring suitable tumour

is to do this sort of trial in a poor-prognosis

specimens for molecular analysis and returning

“We now need to modify and align

high-quality actionable genomic data within a

conventional health and research systems with

other technologies and other practices.

in Campbelltown Hospital, and a researcher at

closely with regulators and payers, and work with

for three molecular targets: HER2 amplification,

government and industry partners to circumvent

of Medical Research, both in Australia. “We

hurdles for the benefit of our patients.

know that, unfortunately, only about 15% of

“We have made a good start in mapping out

the population had molecular targets eligible for

what is necessary, the challenges that we need

this type of treatment and that it has been very

to overcome. Only by actually doing it will we

difficult to do the molecular analysis quickly

While patients waited for the molecular analysis

enough before patients get too sick to be treated.

“We have found that a non-randomised trial

results, they were permitted to start standard-of-

“It became very clear to us that patients

is more appealing to patients in this situation,”

Patients in the initial cohort of the trial

Andrew Biankin went on to say: “It highlights

underwent disease resection, and 70% of patients

results before they start treatment, and they also

how current healthcare systems are not well

eventually had disease recurrence. The researchers

don’t want to be ‘randomised’ and risk being

aligned for a more personalised approach to

began collecting tissue for analysis in 2009;

given ‘standard-of-care’ therapy - which isn’t

however, by the time the first trial site opened

very effective in the case of pancreas cancer -

appropriate changes in healthcare systems to

in April 2013, only eight patients with eligible

“It is important for the public to know how

The researchers altered the trial design to

“We are now particularly aware of the need

hard it is to put into practice molecularly guided

conduct real-time screening for mutations in

to have efficient multidisciplinary teams that can

treatment within the constraints of our health

disease. The screened mutations were expanded to

high-quality tumour samples, analyse them and

that our work will help others who are planning

return the results within a month or less.”