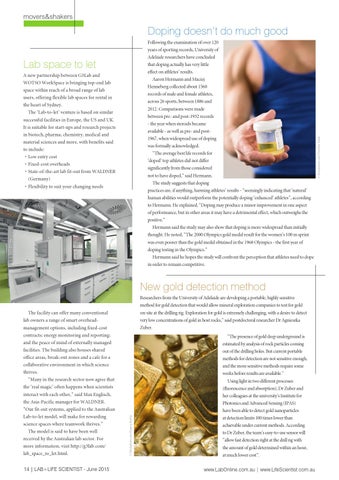 Doping doesn’t do much good Following the examination of over 120 years of sporting records, University of Adelaide researchers have concluded

that doping actually has very little effect on athletes’ results.

A new partnership between G3Lab and

space within reach of a broad range of lab

records of male and female athletes,

the heart of Sydney.

The ‘Lab-to-let’ venture is based on similar

successful facilities in Europe, the US and UK.

- the year when steroids became

It is suitable for start-ups and research projects

in biotech, pharma, chemistry, medical and

1967, when widespread use of doping

“The average best life records for

‘doped’ top athletes did not differ

significantly from those considered

not to have doped,” said Hermann.

The study suggests that doping

• Flexibility to suit your changing needs

practices are, if anything, harming athletes’ results - “seemingly indicating that ‘natural’ human abilities would outperform the potentially doping ‘enhanced’ athletes”, according to Hermann. He explained, “Doping may produce a minor improvement in one aspect of performance, but in other areas it may have a detrimental effect, which outweighs the positive.” Hermann said the study may also show that doping is more widespread than initially thought. He noted, “The 2000 Olympics gold medal result for the women’s 100 m sprint was even poorer than the gold medal obtained in the 1968 Olympics - the first year of doping testing in the Olympics.” Hermann said he hopes the study will confront the perception that athletes need to dope in order to remain competitive.

New gold detection method Researchers from the University of Adelaide are developing a portable, highly sensitive method for gold detection that would allow mineral exploration companies to test for gold on-site at the drilling rig. Exploration for gold is extremely challenging, with a desire to detect

“The presence of gold deep underground is

and the peace of mind of externally managed

out of the drilling holes. But current portable

office areas, break-out zones and a cafe for a

methods for detection are not sensitive enough,

collaborative environment in which science

and the more sensitive methods require some

weeks before results are available.”

“Many in the research sector now agree that

interact with each other,” said Max Englisch,

her colleagues at the university’s Institute for

the Asia-Pacific manager for WALDNER.

“Our fit-out systems, applied to the Australian

have been able to detect gold nanoparticles

Lab-to-let model, will make for rewarding science spaces where teamwork thrives.” The model is said to have been well received by the Australian lab sector. For more information, visit http://g3lab.com/ lab_space_to_let.html.

at detection limits 100 times lower than achievable under current methods. According to Dr Zuber, the team’s easy-to-use sensor will “allow fast detection right at the drill rig with the amount of gold determined within an hour, at much lower cost”.