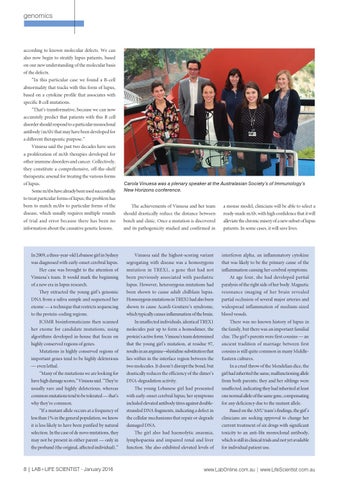 according to known molecular defects. We can also now begin to stratify lupus patients, based on our new understanding of the molecular basis of the defects. “In this particular case we found a B-cell abnormality that tracks with this form of lupus, based on a cytokine profile that associates with specific B cell mutations. “That’s transformative, because we can now accurately predict that patients with this B cell disorder should respond to a particular monoclonal antibody (mAb) that may have been developed for a different therapeutic purpose.” Vinuesa said the past two decades have seen a proliferation of mAb therapies developed for other immune disorders and cancer. Collectively, they constitute a comprehensive, off-the-shelf therapeutic arsenal for treating the various forms of lupus. Some mAbs have already been used successfully

Carola Vinuesa was a plenary speaker at the Australasian Society’s of Immunology’s New Horizons conference.

The achievements of Vinuesa and her team

a mouse model, clinicians will be able to select a

should drastically reduce the distance between

ready-made mAb, with high confidence that it will

of trial and error because there has been no

bench and clinic. Once a mutation is discovered

alleviate the chronic misery of a new subset of lupus

information about the causative genetic lesions.

and its pathogenicity studied and confirmed in

patients. In some cases, it will save lives.

In 2009, a three-year-old Lebanese girl in Sydney

was diagnosed with early-onset cerebral lupus.

segregating with disease was a homozygous

that was likely to be the primary cause of the inflammation causing her cerebral symptoms.

Her case was brought to the attention of

mutation in TREX1, a gene that had not

Vinuesa’s team. It would mark the beginning

been previously associated with paediatric

At age four, she had developed partial

of a new era in lupus research.

lupus. However, heterozygous mutations had

paralysis of the right side of her body. Magnetic

They extracted the young girl’s genomic

been shown to cause adult chilblain lupus.

resonance imaging of her brain revealed

DNA from a saliva sample and sequenced her

Homozygous mutations in TREX1 had also been

exome — a technique that restricts sequencing

shown to cause Acardi-Goutiere’s syndrome,

to the protein-coding regions.

which typically causes inflammation of the brain.

There was no known history of lupus in

her exome for candidate mutations, using

molecules pair up to form a homodimer, the

the family, but there was an important familial

algorithms developed in-house that focus on

clue. The girl’s parents were first cousins — an

that the young girl’s mutation, at residue 97,

ancient tradition of marriage between first

Mutations in highly conserved regions of

results in an arginine→histidine substitution that

cousins is still quite common in many Middle-

lies within in the interface region between the

two molecules. It doesn’t disrupt the bond, but

In a cruel throw of the Mendelian dice, the

drastically reduces the efficiency of the dimer’s

from both parents; they and her siblings were

“Many of the mutations we are looking for have high damage scores,” Vinuesa said. “They’re usually rare and highly deleterious, whereas

The young Lebanese girl had presented

unaffected, indicating they had inherited at least

with early-onset cerebral lupus; her symptoms

one normal allele of the same gene, compensating

for any deficiency due to the mutant allele.

“If a mutant allele occurs at a frequency of

Based on the ANU team’s findings, the girl’s

less than 1% in the general population, we know

the cellular mechanisms that repair or degrade

clinicians are seeking approval to change her

it is less likely to have been purified by natural

selection. In the case of de novo mutations, they

The girl also had haemolytic anaemia,

toxicity to an anti-Ifα monoclonal antibody,

may not be present in either parent — only in

lymphopaenia and impaired renal and liver

which is still in clinical trials and not yet available

the proband (the original, affected individual).”

for individual patient use.