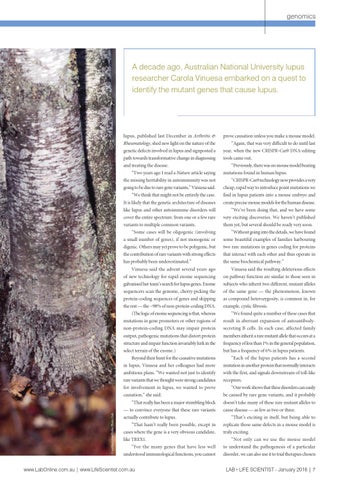 A decade ago, Australian National University lupus researcher Carola Vinuesa embarked on a quest to identify the mutant genes that cause lupus.

“Again, that was very difficult to do until last

genetic defects involved in lupus and signposted a

year, when the new CRISPR-Cas9 DNA-editing

path towards transformative change in diagnosing

and treating the disease. “Two years ago I read a Nature article saying

“Previously, there was no mouse model bearing mutations found in human lupus.

the missing heritability in autoimmunity was not

going to be due to rare gene variants,” Vinuesa said.

“We think that might not be entirely the case.

find in lupus patients into a mouse embryo and

It is likely that the genetic architecture of diseases

“We’ve been doing that, and we have some

cover the entire spectrum: from one or a few rare

them yet, but several should be ready very soon.

“Some cases will be oligogenic (involving

“Without going into the details, we have found

a small number of genes), if not monogenic or

some beautiful examples of families harbouring

digenic. Others may yet prove to be polygenic, but

the contribution of rare variants with strong effects

that interact with each other and thus operate in

has probably been underestimated.”

on pathway function are similar to those seen in

sequencers scan the genome, cherry-picking the

of the same gene — the phenomenon, known

protein-coding sequences of genes and skipping

as compound heterozygosity, is common in, for

(The logic of exome sequencing is that, whereas

“We found quite a number of these cases that

mutations in gene promoters or other regions of

result in aberrant expansion of autoantibody-

secreting B cells. In each case, affected family

members inherit a rare mutant allele that occurs at a

structure and impair function invariably lurk in the

frequency of less than 1% in the general population,

select terrain of the exome.)

but has a frequency of 6% in lupus patients.

Beyond their hunt for the causative mutations

“Each of the lupus patients has a second

in lupus, Vinuesa and her colleagues had more

mutation in another protein that normally interacts

ambitious plans. “We wanted not just to identify

with the first, and signals downstream of toll-like

rare variants that we thought were strong candidates

for involvement in lupus, we wanted to prove causation,” she said. “That really has been a major stumbling block — to convince everyone that these rare variants © outdoorsman/Dollar Photo Club

prove causation unless you make a mouse model.

Rheumatology, shed new light on the nature of the

actually contribute to lupus. “That hasn’t really been possible, except in cases where the gene is a very obvious candidate, like TREX1.

“Our work shows that these disorders can easily be caused by rare gene variants, and it probably doesn’t take many of these rare mutant alleles to cause disease — as few as two or three. “That’s exciting in itself, but being able to replicate those same defects in a mouse model is truly exciting. “Not only can we use the mouse model

“For the many genes that have less well

to understand the pathogenesis of a particular

disorder, we can also use it to trial therapies chosen