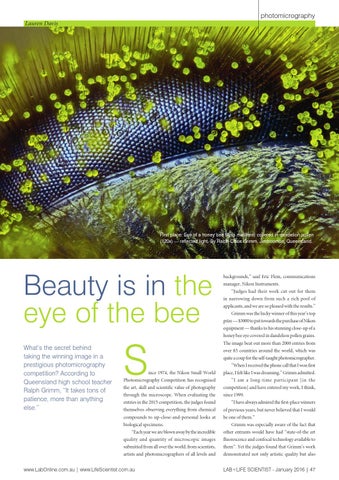 Beauty is in the eye of the bee What’s the secret behind taking the winning image in a prestigious photomicrography competition? According to Queensland high school teacher Ralph Grimm, “It takes tons of patience, more than anything else.”

backgrounds,” said Eric Flem, communications manager, Nikon Instruments. “Judges had their work cut out for them in narrowing down from such a rich pool of applicants, and we are so pleased with the results.” Grimm was the lucky winner of this year’s top prize — $3000 to put towards the purchase of Nikon equipment — thanks to his stunning close-up of a

“I am a long-time participant [in the

the art, skill and scientific value of photography

competition] and have entered my work, I think,

through the microscope. When evaluating the

The image beat out more than 2000 entries from over 83 countries around the world, which was quite a coup for the self-taught photomicrographer. “When I received the phone call that I won first place, I felt like I was dreaming,” Grimm admitted.

entries in the 2015 competition, the judges found

“I have always admired the first-place winners

themselves observing everything from chemical

of previous years, but never believed that I would

compounds to up-close-and-personal looks at

Grimm was especially aware of the fact that

“Each year we are blown away by the incredible

other entrants would have had “state-of-the art

quality and quantity of microscopic images

fluorescence and confocal technology available to

submitted from all over the world, from scientists,

them”. Yet the judges found that Grimm’s work

artists and photomicrographers of all levels and

demonstrated not only artistic quality but also