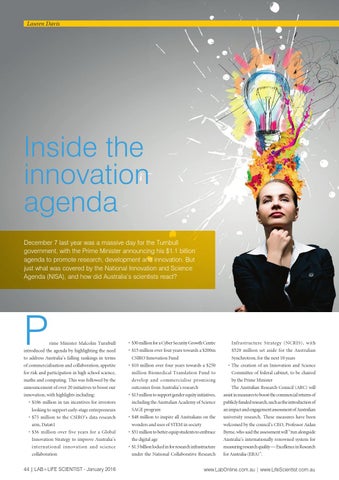 Inside the innovation agenda December 7 last year was a massive day for the Turnbull government, with the Prime Minister announcing his $1.1 billion agenda to promote research, development and innovation. But just what was covered by the National Innovation and Science Agenda (NISA), and how did Australia’s scientists react?

introduced the agenda by highlighting the need

$520 million set aside for the Australian

Synchrotron, for the next 10 years

of commercialisation and collaboration, appetite

• The creation of an Innovation and Science

for risk and participation in high school science,

Committee of federal cabinet, to be chaired

maths and computing. This was followed by the

by the Prime Minister

announcement of over 20 initiatives to boost our

The Australian Research Council (ARC) will

innovation, with highlights including: • $106 million in tax incentives for investors looking to support early-stage entrepreneurs • $75 million to the CSIRO’s data research arm, Data61 • $36 million over five years for a Global Innovation Strategy to improve Australia’s international innovation and science collaboration

assist in measures to boost the commercial returns of

including the Australian Academy of Science

publicly funded research, such as the introduction of

an impact and engagement assessment of Australian

university research. These measures have been welcomed by the council’s CEO, Professor Aidan

• $51 million to better equip students to embrace the digital age

Byrne, who said the assessment will “run alongside Australia’s internationally renowned system for

• $1.5 billion locked in for research infrastructure under the National Collaborative Research