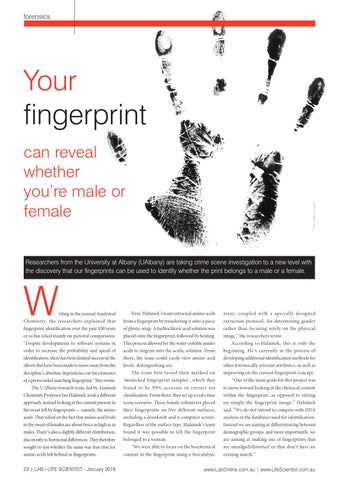 can reveal whether you’re male or female Researchers from the University at Albany (UAlbany) are taking crime scene investigation to a new level with the discovery that our fingerprints can be used to identify whether the print belongs to a male or a female.

riting in the journal Analytical

assay, coupled with a specially designed

Chemistry, the researchers explained that

from a fingerprint by transferring it onto a piece

fingerprint identification over the past 100 years

of plastic wrap. A hydrochloric acid solution was

rather than focusing solely on the physical

or so has relied mainly on pictorial comparisons.

placed onto the fingerprint, followed by heating.

“Despite developments to software systems in

This process allowed for the water-soluble amino

According to Halámek, this is only the

order to increase the probability and speed of

acids to migrate into the acidic solution. From

beginning. He’s currently in the process of

identification, there has been limited success in the

there, the team could easily view amino acid

efforts that have been made to move away from the

other forensically relevant attributes, as well as

discipline’s absolute dependence on the existence

The team first tested their method on

of a prerecorded matching fingerprint,” they wrote.

‘mimicked fingerprint samples’, which they

“One of the main goals for this project was

found to be 99% accurate in correct sex

classification. From there, they set up a real crime

within the fingerprint, as opposed to relying

on simply the fingerprint image,” Halámek

the sweat left by fingerprints — namely, the amino

their fingerprints on five different surfaces,

said. “We do not intend to compete with DNA

acids. They relied on the fact that amino acid levels

including a doorknob and a computer screen.

analysis or the databases used for identification.

Regardless of the surface type, Halámek’s team

Instead we are aiming at differentiating between

found it was possible to tell the fingerprint

demographic groups, and more importantly, we

due mostly to hormonal differences. They therefore

belonged to a woman.

are aiming at making use of fingerprints that

sought to test whether the same was true true for amino acids left behind in fingerprints.

improving on the current fingerprint concept.

are smudged/distorted or that don’t have an existing match.”