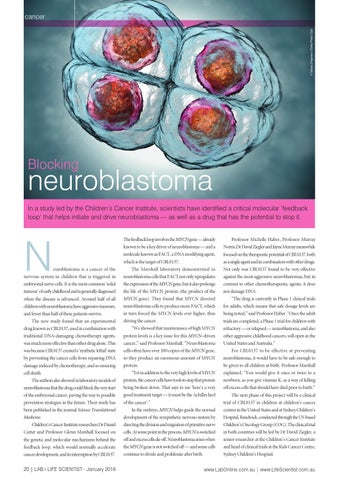 neuroblastoma In a study led by the Children’s Cancer Institute, scientists have identified a critical molecular ‘feedback loop’ that helps initiate and drive neuroblastoma — as well as a drug that has the potential to stop it.

known to be a key driver of neuroblastoma — and a

focused on the therapeutic potential of CBL0137, both

as a single agent and in combination with other drugs.

euroblastoma is a cancer of the

The Marshall laboratory demonstrated in

Not only was CBL0137 found to be very effective

nervous system in children that is triggered in

neuroblastoma cells that FACT not only upregulates

against the most aggressive neuroblastomas, but in

embryonal nerve cells. It is the most common ‘solid

the expression of the MYCN gene, but it also prolongs

contrast to other chemotherapeutic agents, it does

tumour’ of early childhood and is generally diagnosed

the life of the MYCN protein (the product of the

when the disease is advanced. Around half of all

“The drug is currently in Phase 1 clinical trials

children with neuroblastoma have aggressive tumours,

for adults, which means that safe dosage levels are

and fewer than half of these patients survive.

in turn forced the MYCN levels ever higher, thus

being tested,” said Professor Haber. “Once the adult

trials are completed, a Phase 1 trial for children with

The new study found that an experimental drug known as CBL0137, used in combination with

“We showed that maintenance of high MYCN

refractory — or relapsed — neuroblastoma, and also

protein levels is a key issue for this MYCN-driven

other aggressive childhood cancers, will open in the

was much more effective than either drug alone. This

was because CBL0137 created a ‘synthetic lethal’ state

cells often have over 100 copies of the MYCN gene,

For CBL0137 to be effective at preventing

by preventing the cancer cells from repairing DNA

so they produce an enormous amount of MYCN

neuroblastoma, it would have to be safe enough to

damage induced by chemotherapy, and so ensuring

be given to all children at birth. Professor Marshall

“Yet in addition to the very high levels of MYCN

explained, “You would give it once or twice to a

The authors also showed in laboratory models of

protein, the cancer cells have tools to stop that protein

newborn, as you give vitamin K, as a way of killing

neuroblastoma that the drug could block the very start

being broken down. That says to me ‘here’s a very

off excess cells that should have died prior to birth.”

of the embryonal cancer, paving the way to possible

good treatment target — it must be the Achilles heel

prevention strategies in the future. Their study has

been published in the journal Science Translational Medicine.

In the embryo, MYCN helps guide the normal

centres in the United States and at Sydney Children’s

development of the sympathetic nervous system by

Hospital, Randwick, conducted through the US-based

directing the division and migration of primitive nerve

cells. At some point in the process, MYCN is switched

in both countries will be led by Dr David Ziegler, a

the genetic and molecular mechanisms behind the

off and excess cells die off. Neuroblastoma arises when

feedback loop, which would normally accelerate

the MYCN gene is not switched off — and some cells

and head of clinical trials at the Kids Cancer Centre,

cancer development, and its interruption by CBL0137.

continue to divide and proliferate after birth.