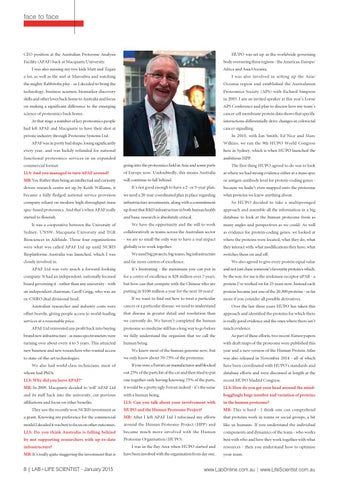 HUPO was set up as the worldwide governing

Facility (APAF) back at Macquarie University.

I was also missing my two kids Matt and Tegan

a lot, as well as the surf at Maroubra and watching

I was also involved in setting up the Asia/

the mighty Rabbitohs play - so I decided to bring the

Oceania region and established the Australasian

skills and other loves back home to Australia and focus

on making a significant difference to the emerging

APS Conference and plan to discuss how my team’s

science of proteomics back home.

At that stage a number of key proteomics people

had left APAF and Macquarie to have their shot at

every year, and was luckily refunded for national

here in Sydney, which is when HUPO launched the

functional proteomics services in an expanded

going into the proteomics field in Asia and some parts

The first thing HUPO agreed to do was to look

LLS: And you managed to turn APAF around?

at where we had strong evidence either at a mass spec

MB: Yes. Rather than being an intellectual and curiosity

will continue to fall behind.

or antigen-antibody level for protein-coding genes -

driven research centre set up by Keith Williams, it

we need a 20-year coordinated plan in place regarding

infrastructure investments, along with a commitment

So HUPO decided to take a multipronged

up front that R&amp;D infrastructure in both human health

approach and assemble all the information in a big

and basic research is absolutely critical.

database to look at the human proteome from as

because we hadn’t even mapped onto the proteome what proteins we knew anything about.

It was a cooperative between the University of

We have the opportunity and the will to work

many angles and perspectives as we could. As well

collaboratively as teams across the Australian sector

as evidence for protein-coding genes, we looked at

Biosciences in Adelaide. Those four organisations

where the proteins were located, what they do, what

were what was called APAF Ltd up until NCRIS

globally is to work together.

they interact with, what modifications they have, what

Bioplatforms Australia was launched, which I was closely involved in.

switches them on and off. We also agreed to give every protein equal value

APAF Ltd was very much a forward-looking

It’s frustrating - the maximum you can put in

and not just chase someone’s favourite protein/s which,

company. It had an independent, nationally focused

for a centre of excellence is $28 million over 7 years,

by the way, for me is the urokinase receptor uPAR - a

board governing it - rather than any university - with

but how can that compete with the Chinese who are

protein I’ve worked on for 25 years now. Instead each

an independent chairman, Geoff Grigg, who was an

If we want to find out how to treat a particular

more if you consider all possible derivatives.

Australian researcher and industry costs were

cancer or a particular disease, we need to understand

Over the last three years HUPO has taken this

that disease in greater detail and resolution than

approach and identified the proteins for which there

services at a reasonable price.

we currently do. We haven’t completed the human

is really good evidence and the ones where there isn’t

APAF Ltd reinvested any profit back into buying

proteome so medicine still has a long way to go before

we fully understand the organism that we call the

turning over about every 4 to 5 years. This attracted

As part of these efforts, two recent Nature papers with draft maps of the proteome were published this

We know most of the human genome now, but we only know about 70-75% of the proteome.

If you were a Ferrari car manufacturer and blocked

have been coordinated with HUPO’s standards and

database efforts and were discussed at length at the

LLS: Why did you leave APAF?*

one together only having/knowing 75% of the parts,

LLS: How do you get your head around the mind-

and its staff back into the university, cut previous

with a human being.

affiliations and focus on other benefits.

LLS: Can you talk about your involvement with

in the human proteome?

HUPO and the Human Proteome Project?

MB: This is hard - I think one can comprehend

a grant. Knowing my preference for the commercial

MB: After I left APAF Ltd I refocused my efforts

that proteins work in teams or social groups, a bit

model I decided it was best to focus on other outcomes.

around the Human Proteome Project (HPP) and

LLS: Do you think Australia is falling behind

became much more involved with the Human

components and dynamics of the team - who works

by not supporting researchers with up-to-date

best with who and how they work together with what

We also had world-class technicians, most of

They saw the recently won NCRIS investment as

infrastructure? MB: It’s really quite staggering the investment that is

I was in the Bay Area when HUPO started and have been involved with the organisation from day one.

resources - then you understand how to optimise your team.