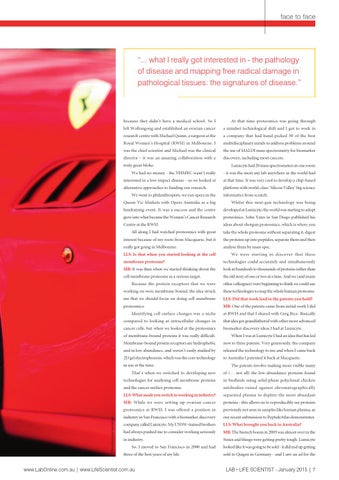 “... what I really got interested in - the pathology of disease and mapping free radical damage in pathological tissues: the signatures of disease.”

because they didn’t have a medical school. So I

At that time proteomics was going through

a mindset technological shift and I got to work in

research centre with Michael Quinn, a surgeon at the

a company that had hand-picked 50 of the best

multidisciplinary minds to address problems around

was the chief scientist and Michael was the clinical

the use of MALDI mass spectrometry for biomarker

director - it was an amazing collaboration with a

discovery, including most cancers.

- it was the most any lab anywhere in the world had

interested in a low-impact disease - so we looked at

at that time. It was very cool to develop a chip-based

alternative approaches to funding our research.

We went to philanthropists, we ran opera in the

Queen Vic Markets with Opera Australia as a big

Whilst this next-gen technology was being

fundraising event. It was a success and the centre

developed at Lumicyte, the world was starting to adopt

grew into what became the Women’s Cancer Research

Centre at the RWH.

ideas about shotgun proteomics, which is where you

All along I had watched proteomics with great

take the whole proteome without separating it, digest

interest because of my roots from Macquarie, but it

the proteins up into peptides, separate them and then

really got going in Melbourne.

analyse them by mass spec.

LLS: Is that when you started looking at the cell

We were starting to discover that these

technologies could accurately and simultaneously

MB: It was then when we started thinking about the

look at hundreds to thousands of proteins rather than

the old story of one or two at a time. And we (and many

Because the protein receptors that we were

other colleagues) were beginning to think we could use

working on were membrane bound, the idea struck

these technologies to map the whole human proteome.

me that we should focus on doing cell membrane

LLS: Did that work lead to the patents you hold?

MB: One of the patents came from initial work I did

at RWH and that I shared with Greg Rice. Basically

compared to looking at intracellular changes in

that idea got grandfathered with other more advanced

cancer cells, but when we looked at the proteomics

biomarker discovery ideas I had at Lumicyte.

of membrane-bound proteins it was really difficult.

and in low abundance, and weren’t easily studied by

released the technology to me and when I came back

2D gel electrophoresis, which was the core technology

to Australia I patented it back at Macquarie.

in use at the time.

Lumicyte had 20 mass spectrometers in one room

We had no money - the NHMRC wasn’t really

That’s when we switched to developing new

of (… not all) the low-abundance proteins found

and the cancer surface proteome.

LLS: What made you switch to working in industry?

separated plasma to deplete the most abundant

MB: While we were setting up ovarian cancer

proteins - this allows us to reproducibly see proteins

proteomics at RWH, I was offered a position in

previously not seen in samples like human plasma, as

industry in San Francisco with a biomarker discovery

our recent submission to PeptideAtlas demonstrates.

LLS: What brought you back to Australia?

had always pushed me to consider working seriously

MB: The biotech boom in 2003 was almost over in the

States and things were getting pretty tough. Lumicyte

So, I moved to San Francisco in 2000 and had three of the best years of my life.