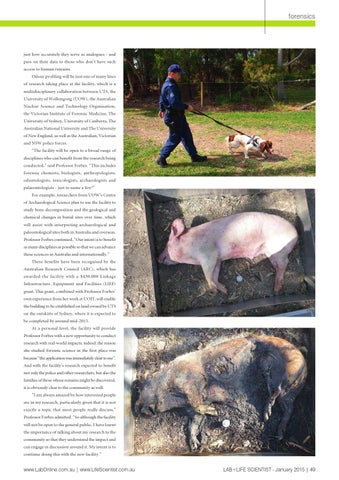 just how accurately they serve as analogues - and pass on their data to those who don’t have such access to human remains. Odour profiling will be just one of many lines of research taking place at the facility, which is a multidisciplinary collaboration between UTS, the University of Wollongong (UOW), the Australian Nuclear Science and Technology Organisation, the Victorian Institute of Forensic Medicine, The University of Sydney, University of Canberra, The Australian National University and The University of New England, as well as the Australian, Victorian and NSW police forces. “The facility will be open to a broad range of disciplines who can benefit from the research being conducted,” said Professor Forbes. “This includes forensic chemists, biologists, anthropologists, odontologists, toxicologists, archaeologists and palaeontologists - just to name a few!” For example, researchers from UOW’s Centre of Archaeological Science plan to use the facility to study bone decomposition and the geological and chemical changes in burial sites over time, which will assist with interpreting archaeological and paleontological sites both in Australia and overseas. Professor Forbes continued, “Our intent is to benefit as many disciplines as possible so that we can advance these sciences in Australia and internationally.” These benefits have been recognised by the Australian Research Council (ARC), which has awarded the facility with a $430,000 Linkage Infrastructure, Equipment and Facilities (LIEF) grant. This grant, combined with Professor Forbes’ own experience from her work at UOIT, will enable the building to be established on land owned by UTS on the outskirts of Sydney, where it is expected to be completed by around mid-2015. At a personal level, the facility will provide Professor Forbes with a new opportunity to conduct research with real-world impacts; indeed, the reason she studied forensic science in the first place was because “the application was immediately clear to me”. And with the facility’s research expected to benefit not only the police and other researchers, but also the families of those whose remains might be discovered, it is obviously clear to the community as well. “I am always amazed by how interested people are in my research, particularly given that it is not exactly a topic that most people really discuss,” Professor Forbes admitted. “So although the facility will not be open to the general public, I have learnt the importance of talking about my research to the community so that they understand the impact and can engage in discussion around it. My intent is to continue doing this with the new facility.”