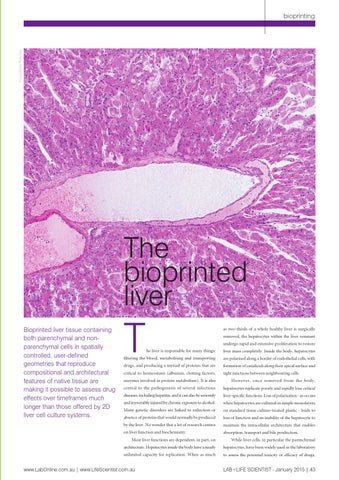 The bioprinted liver Bioprinted liver tissue containing both parenchymal and nonparenchymal cells in spatially controlled, user-defined geometries that reproduce compositional and architectural features of native tissue are making it possible to assess drug effects over timeframes much longer than those offered by 2D liver cell culture systems.

as two-thirds of a whole healthy liver is surgically removed, the hepatocytes within the liver remnant undergo rapid and extensive proliferation to restore he liver is responsible for many things:

filtering the blood, metabolising and transporting

are polarised along a border of endothelial cells, with

drugs, and producing a myriad of proteins that are

formation of canaliculi along their apical surface and

enzymes involved in protein metabolism). It is also

However, once removed from the body,

central to the pathogenesis of several infectious

diseases, including hepatitis, and it can also be seriously

and irreversibly injured by chronic exposure to alcohol.

when hepatocytes are cultured in simple monolayers

Many genetic disorders are linked to reduction or

absence of proteins that would normally be produced

loss of function and an inability of the hepatocyte to

by the liver. No wonder that a lot of research centres

maintain the intracellular architecture that enables

on liver function and biochemistry.

Most liver functions are dependent, in part, on

While liver cells, in particular the parenchymal

architecture. Hepatocytes inside the body have a nearly

hepatocytes, have been widely used in the laboratory

unlimited capacity for replication. When as much

to assess the potential toxicity or efficacy of drugs,