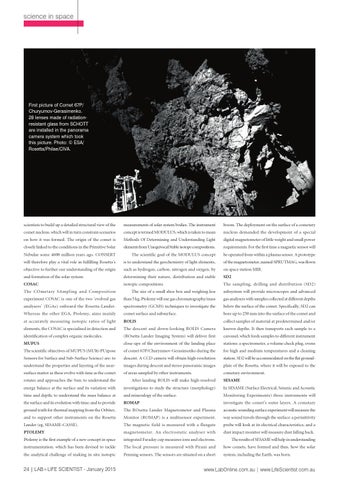 First picture of Comet 67P/ Churyumov-Gerasimenko. 28 lenses made of radiationresistant glass from SCHOTT are installed in the panorama camera system which took this picture. Photo: © ESA/ Rosetta/Philae/CIVA.

scientists to build up a detailed structural view of the

boom. The deployment on the surface of a cometary

comet nucleus, which will in turn constrain scenarios

concept is termed MODULUS, which is taken to mean

nucleus demanded the development of a special

on how it was formed. The origin of the comet is

Methods Of Determining and Understanding Light

closely linked to the conditions in the Primitive Solar

requirements. For the first time a magnetic sensor will

Nebulae some 4600 million years ago. CONSERT

The scientific goal of the MODULUS concept

be operated from within a plasma sensor. A prototype

will therefore play a vital role in fulfilling Rosetta’s

is to understand the geochemistry of light elements,

of the magnetometer, named SPRUTMAG, was flown

objective to further our understanding of the origin

such as hydrogen, carbon, nitrogen and oxygen, by

and formation of the solar system.

determining their nature, distribution and stable

The sampling, drilling and distribution (SD2)

The COmetary SAmpling and Composition

The size of a small shoe box and weighing less

subsystem will provide microscopes and advanced

experiment COSAC is one of the two ‘evolved gas

than 5 kg, Ptolemy will use gas chromatography/mass

analysers’ (EGAs) onboard the Rosetta-Lander.

spectrometry (GCMS) techniques to investigate the

below the surface of the comet. Specifically, SD2 can

Whereas the other EGA, Ptolemy, aims mainly

collect samples of material at predetermined and/or

elements, the COSAC is specialised in detection and

known depths. It then transports each sample to a

close-ups of the environment of the landing place

The scientific objectives of MUPUS (MUlti-PUrpose

of comet 67P/Churyumov-Gerasimenko during the

for high and medium temperatures and a cleaning

Sensors for Surface and Sub-Surface Science) are: to

station. SD2 will be accommodated on the flat ground-

understand the properties and layering of the near-

plate of the Rosetta, where it will be exposed to the

surface matter as these evolve with time as the comet

of areas sampled by other instruments.

rotates and approaches the Sun; to understand the

energy balance at the surface and its variation with

investigations to study the structure (morphology)

time and depth; to understand the mass balance at

and mineralogy of the surface.

the surface and its evolution with time; and to provide

ground truth for thermal mapping from the Orbiter,

The ROsetta Lander Magnetometer and Plasma

and to support other instruments on the Rosetta

Monitor (ROMAP) is a multisensor experiment.

way sound travels through the surface; a permittivity

The magnetic field is measured with a fluxgate

probe will look at its electrical characteristics; and a

magnetometer. An electrostatic analyser with

Ptolemy is the first example of a new concept in space

The results of SESAME will help in understanding

instrumentation, which has been devised to tackle

The local pressure is measured with Pirani and

how comets, have formed and thus, how the solar

the analytical challenge of making in situ isotopic

Penning sensors. The sensors are situated on a short

system, including the Earth, was born.