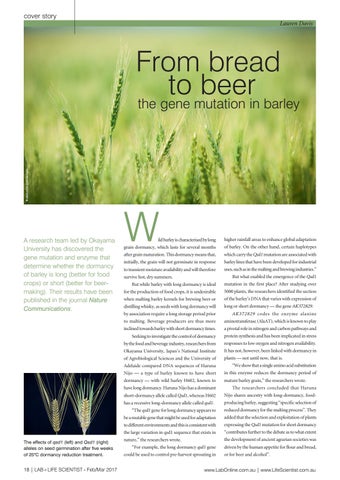 From bread to beer the gene mutation in barley

A research team led by Okayama University has discovered the gene mutation and enzyme that determine whether the dormancy of barley is long (better for food crops) or short (better for beermaking). Their results have been published in the journal Nature Communications.

The effects of qsd1 (left) and Qsd1 (right) alleles on seed germination after five weeks of 25°C dormancy reduction treatment.

ild barley is characterised by long

of barley. On the other hand, certain haplotypes

after grain maturation. This dormancy means that,

which carry the Qsd1 mutation are associated with

initially, the grain will not germinate in response

barley lines that have been developed for industrial

to transient moisture availability and will therefore

uses, such as in the malting and brewing industries.” But what enabled the emergence of the Qsd1

survive hot, dry summers. But while barley with long dormancy is ideal

mutation in the first place? After studying over

for the production of food crops, it is undesirable

5000 plants, the researchers identified the section

when malting barley kernels for brewing beer or

of the barley’s DNA that varies with expression of

distilling whisky, as seeds with long dormancy will

by association require a long storage period prior

aminotransferase (AlaAT), which is known to play

a pivotal role in nitrogen and carbon pathways and

Seeking to investigate the control of dormancy

protein synthesis and has been implicated in stress

by the food and beverage industry, researchers from

It has not, however, been linked with dormancy in

of Agrobiological Sciences and the University of

plants — not until now, that is.

“We show that a single amino acid substitution

Nijo — a type of barley known to have short

in this enzyme reduces the dormancy period of

have long dormancy. Haruna Nijo has a dominant

The researchers concluded that Haruna

“The qsd1 gene for long dormancy appears to

reduced dormancy for the malting process”. They

be a mutable gene that might be used for adaptation

added that the selection and exploitation of plants

to different environments and this is consistent with

the large variation in qsd1 sequence that exists in

“contributes further to the debate as to what extent

the development of ancient agrarian societies was

“For example, the long dormancy qsd1 gene could be used to control pre-harvest sprouting in

driven by the human appetite for flour and bread, or for beer and alcohol”.