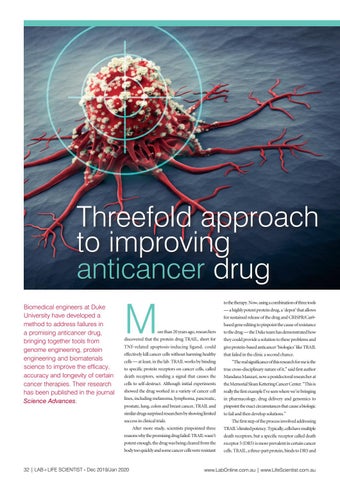 Threefold approach to improving anticancer drug Biomedical engineers at Duke University have developed a method to address failures in a promising anticancer drug, bringing together tools from genome engineering, protein engineering and biomaterials science to improve the efficacy, accuracy and longevity of certain cancer therapies. Their research has been published in the journal Science Advances.

to the therapy. Now, using a combination of three tools — a highly potent protein drug, a ‘depot’ that allows for sustained release of the drug and CRISPR/Cas9based gene editing to pinpoint the cause of resistance

ore than 20 years ago, researchers

to the drug — the Duke team has demonstrated how

discovered that the protein drug TRAIL, short for

they could provide a solution to these problems and

that failed in the clinic a second chance.

cells — at least, in the lab. TRAIL works by binding

“The real significance of this research for me is the

death receptors, sending a signal that causes the

cells to self-destruct. Although initial experiments

the Memorial Sloan Kettering Cancer Center. “This is

showed the drug worked in a variety of cancer cell

in pharmacology, drug delivery and genomics to

pinpoint the exact circumstances that cause a biologic

to fail and then develop solutions.”

The first step of the process involved addressing

potent enough, the drug was being cleared from the

body too quickly and some cancer cells were resistant

cells. TRAIL, a three-part protein, binds to DR5 and