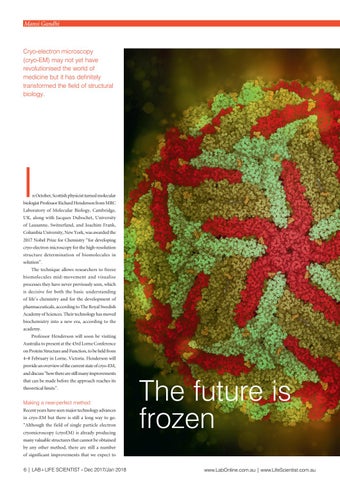 Cryo-electron microscopy (cryo-EM) may not yet have revolutionised the world of medicine but it has definitely transformed the field of structural biology.

biologist Professor Richard Henderson from MRC Laboratory of Molecular Biology, Cambridge, UK, along with Jacques Dubochet, University of Lausanne, Switzerland, and Joachim Frank, Columbia University, New York, was awarded the 2017 Nobel Prize for Chemistry “for developing cryo-electron microscopy for the high-resolution structure determination of biomolecules in solution”. The technique allows researchers to freeze biomolecules mid-movement and visualise processes they have never previously seen, which is decisive for both the basic understanding of life’s chemistry and for the development of pharmaceuticals, according to The Royal Swedish Academy of Sciences. Their technology has moved biochemistry into a new era, according to the academy. Professor Henderson will soon be visiting Australia to present at the 43rd Lorne Conference on Protein Structure and Function, to be held from 4–8 February in Lorne, Victoria. Henderson will provide an overview of the current state of cryo-EM, and discuss “how there are still many improvements that can be made before the approach reaches its theoretical limits”.

Making a near-perfect method Recent years have seen major technology advances in cryo-EM but there is still a long way to go. “Although the field of single particle electron cryomicroscopy (cryoEM) is already producing

The future is frozen

many valuable structures that cannot be obtained by any other method, there are still a number of significant improvements that we expect to