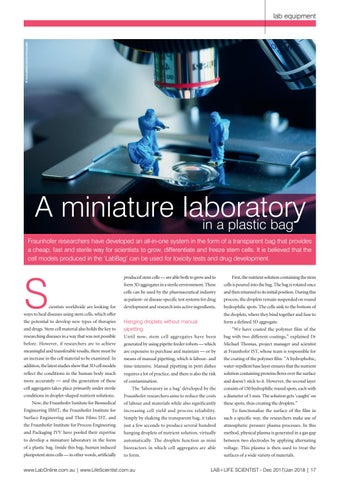 A miniature laboratory in a plastic bag Fraunhofer researchers have developed an all-in-one system in the form of a transparent bag that provides a cheap, fast and sterile way for scientists to grow, differentiate and freeze stem cells. It is believed that the cell models produced in the ‘LabBag’ can be used for toxicity tests and drug development.

cientists worldwide are looking for

produced stem cells — are able both to grow and to

form 3D aggregates in a sterile environment. These

cells is poured into the bag. The bag is rotated once

cells can be used by the pharmaceutical industry

and then returned to its initial position. During this

as patient- or disease-specific test systems for drug

process, the droplets remain suspended on round

development and research into active ingredients.

hydrophilic spots. The cells sink to the bottom of

the droplets, where they bind together and fuse to form a defined 3D aggregate.

and drugs. Stem cell material also holds the key to

researching diseases in a way that was not possible

Until now, stem cell aggregates have been

before. However, if researchers are to achieve

meaningful and transferable results, there must be

are expensive to purchase and maintain — or by

at Fraunhofer IST, whose team is responsible for

an increase in the cell material to be examined. In

means of manual pipetting, which is labour- and

the coating of the polymer film. “A hydrophobic,

water-repellent base layer ensures that the nutrient

reflect the conditions in the human body much

requires a lot of practice, and there is also the risk

more accurately — and the generation of these

and doesn’t stick to it. However, the second layer

the potential to develop new types of therapies

“We have coated the polymer film of the

The ‘laboratory in a bag’ developed by the

consists of 150 hydrophilic round spots, each with

a diameter of 5 mm. The solution gets ‘caught’ on

Now, the Fraunhofer Institute for Biomedical

of labour and materials while also significantly

these spots, thus creating the droplets.”

Engineering IBMT, the Fraunhofer Institute for

To functionalise the surface of the film in

Simply by shaking the transparent bag, it takes

such a specific way, the researchers make use of

the Fraunhofer Institute for Process Engineering

atmospheric pressure plasma processes. In this

and Packaging IVV have pooled their expertise

method, physical plasma is generated in a gas gap

to develop a miniature laboratory in the form

automatically. The droplets function as mini

between two electrodes by applying alternating

of a plastic bag. Inside this bag, human induced

bioreactors in which cell aggregates are able

voltage. This plasma is then used to treat the

surfaces of a wide variety of materials.