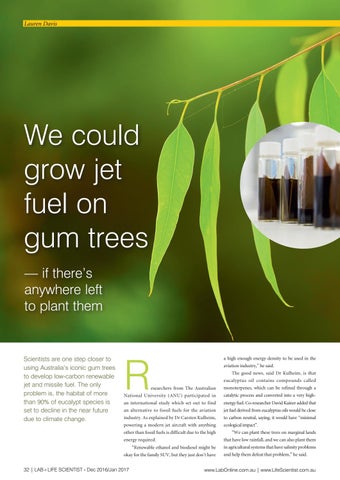 Scientists are one step closer to using Australia’s iconic gum trees to develop low-carbon renewable jet and missile fuel. The only problem is, the habitat of more than 90% of eucalypt species is set to decline in the near future due to climate change.

a high enough energy density to be used in the aviation industry,” he said. The good news, said Dr Kulheim, is that eucalyptus oil contains compounds called esearchers from The Australian

monoterpenes, which can be refined through a

catalytic process and converted into a very high-

an international study which set out to find

an alternative to fossil fuels for the aviation

jet fuel derived from eucalyptus oils would be close

to carbon neutral, saying, it would have “minimal

powering a modern jet aircraft with anything

other than fossil fuels is difficult due to the high “Renewable ethanol and biodiesel might be okay for the family SUV, but they just don’t have

“We can plant these trees on marginal lands that have low rainfall, and we can also plant them

in agricultural systems that have salinity problems and help them defeat that problem,” he said.