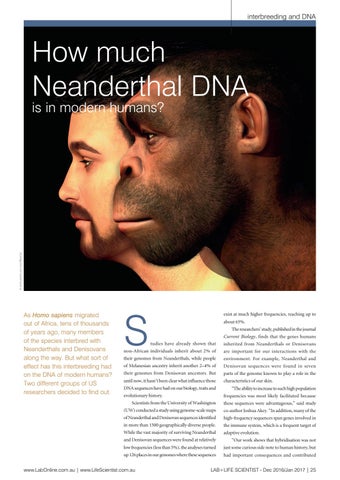 How much Neanderthal DNA

is in modern humans?

As Homo sapiens migrated out of Africa, tens of thousands of years ago, many members of the species interbred with Neanderthals and Denisovans along the way. But what sort of effect has this interbreeding had on the DNA of modern humans? Two different groups of US researchers decided to find out.

exist at much higher frequencies, reaching up to about 65%. The researchers’ study, published in the journal Current Biology, finds that the genes humans tudies have already shown that

inherited from Neanderthals or Denisovans

non-African individuals inherit about 2% of

are important for our interactions with the

their genomes from Neanderthals, while people

environment. For example, Neanderthal and

of Melanesian ancestry inherit another 2–4% of

Denisovan sequences were found in seven

their genomes from Denisovan ancestors. But

parts of the genome known to play a role in the

until now, it hasn’t been clear what influence those

characteristics of our skin.

DNA sequences have had on our biology, traits and evolutionary history.

Scientists from the University of Washington

these sequences were advantageous,” said study

co-author Joshua Akey. “In addition, many of the

of Neanderthal and Denisovan sequences identified

in more than 1500 geographically diverse people.

the immune system, which is a frequent target of

While the vast majority of surviving Neanderthal

and Denisovan sequences were found at relatively

“Our work shows that hybridisation was not

just some curious side note to human history, but

up 126 places in our genomes where these sequences

had important consequences and contributed