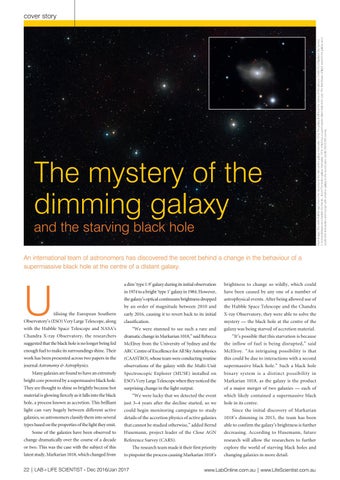 The mystery of the dimming galaxy and the starving black hole

An international team of astronomers has discovered the secret behind a change in the behaviour of a supermassive black hole at the centre of a distant galaxy.

a dim ‘type 1.9’ galaxy during its initial observation

brightness to change so wildly, which could

have been caused by any one of a number of

astrophysical events. After being allowed use of

by an order of magnitude between 2010 and

the Hubble Space Telescope and the Chandra

early 2016, causing it to revert back to its initial

X-ray Observatory, they were able to solve the

mystery — the black hole at the centre of the

with the Hubble Space Telescope and NASA’s

“We were stunned to see such a rare and

“It’s possible that this starvation is because

suggested that the black hole is no longer being fed

McElroy from the University of Sydney and the

the inflow of fuel is being disrupted,” said

enough fuel to make its surroundings shine. Their

ARC Centre of Excellence for All Sky Astrophysics

McElroy. “An intriguing possibility is that

work has been presented across two papers in the

(CAASTRO), whose team were conducting routine

this could be due to interactions with a second

galaxy was being starved of accretion material.

observations of the galaxy with the Multi-Unit

Many galaxies are found to have an extremely

binary system is a distinct possibility in

ESO’s Very Large Telescope when they noticed the

Markarian 1018, as the galaxy is the product

They are thought to shine so brightly because hot

surprising change in the light output.

of a major merger of two galaxies — each of

material is glowing fiercely as it falls into the black

“We were lucky that we detected the event

hole, a process known as accretion. This brilliant

just 3–4 years after the decline started, so we

could begin monitoring campaigns to study

Since the initial discovery of Markarian

galaxies, so astronomers classify them into several

details of the accretion physics of active galaxies

types based on the properties of the light they emit.

able to confirm the galaxy’s brightness is further

Some of the galaxies have been observed to

decreasing. According to Husemann, future

research will allow the researchers to further

change dramatically over the course of a decade or two. This was the case with the subject of this

The research team made it their first priority

latest study, Markarian 1018, which changed from

which likely contained a supermassive black hole in its centre.

explore the world of starving black holes and changing galaxies in more detail.

Main image: This wide-field image shows the sky around the faint active galaxy Markarian 1018. The galaxy itself is at the centre of the picture. Credit: ESO/Digitized Sky Survey 2. Acknowledgement: Davide De Martin. Inset: The active galaxy Markarian 1018, which has a supermassive black hole at its core. The faint loops of light around the galaxy are a result of its interaction and merger with another galaxy in the recent past. Credit: ESO/CARS survey.