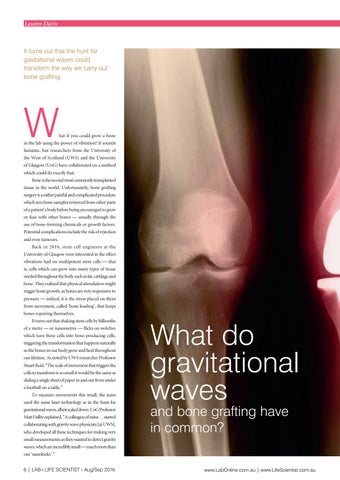 It turns out that the hunt for gavitational waves could transform the way we carry out bone grafting.

hat if you could grow a bone

in the lab using the power of vibration? It sounds fantastic, but researchers from the University of the West of Scotland (UWS) and the University of Glasgow (UoG) have collaborated on a method which could do exactly that. Bone is the second most commonly transplanted tissue in the world. Unfortunately, bone grafting surgery is a rather painful and complicated procedure which sees bone samples removed from other parts of a patient’s body before being encouraged to grow or fuse with other bones — usually through the use of bone-forming chemicals or growth factors. Potential complications include the risk of rejection and even tumours. Back in 2010, stem cell engineers at the University of Glasgow were interested in the effect vibrations had on multipotent stem cells — that is, cells which can grow into many types of tissue needed throughout the body such as fat, cartilage and bone. They realised that physical stimulation might trigger bone growth, as bones are very responsive to pressure — indeed, it is the stress placed on them from movement, called ‘bone loading’, that keeps bones repairing themselves. It turns out that shaking stem cells by billionths of a metre — or nanometres — flicks on switches which turn these cells into bone-producing cells, triggering the transformation that happens naturally as the bones in our body grow and heal throughout our lifetime. As noted by UWS researcher Professor Stuart Reid, “The scale of movement that triggers the cells to transform is so small it would be the same as sliding a single sheet of paper in and out from under a football on a table.” To measure movements this small, the team used the same laser technology as in the hunt for gravitational waves, albeit scaled down. UoG Professor Matt Dalby explained, “A colleague of mine… started collaborating with gravity wave physicists [at UWS], who developed all these techniques for making very

What do gravitational waves and bone grafting have in common?

small measurements as they wanted to detect gravity waves, which are incredibly small — much more than our ‘nanokicks’.”