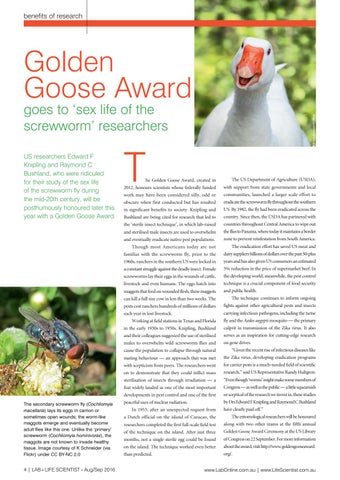 Golden Goose Award US researchers Edward F Knipling and Raymond C Bushland, who were ridiculed for their study of the sex life of the screwworm fly during the mid-20th century, will be posthumously honoured later this year with a Golden Goose Award.

The secondary screwworm fly (Cochliomyia macellaria) lays its eggs in carrion or sometimes open wounds; the worm-like maggots emerge and eventually become adult flies like this one. Unlike the ‘primary’ screwworm (Cochliomyia hominivorax), the maggots are not known to invade healthy tissue. Image courtesy of K Schneider (via Flickr) under CC BY-NC 2.0

goes to ‘sex life of the screwworm’ researchers

he Golden Goose Award, created in

The US Department of Agriculture (USDA),

with support from state governments and local

work may have been considered silly, odd or

obscure when first conducted but has resulted

eradicate the screwworm fly throughout the southern

in significant benefits to society. Knipling and

US. By 1982, the fly had been eradicated across the

Bushland are being cited for research that led to

country. Since then, the USDA has partnered with

the ‘sterile insect technique’, in which lab-raised

countries throughout Central America to wipe out

and sterilised male insects are used to overwhelm

the flies to Panama, where today it maintains a border

Though most Americans today are not

The eradication effort has saved US meat and

familiar with the screwworm fly, prior to the

dairy suppliers billions of dollars over the past 50-plus

1960s, ranchers in the southern US were locked in

years and has also given US consumers an estimated

a constant struggle against the deadly insect. Female

5% reduction in the price of supermarket beef. In

screwworms lay their eggs in the wounds of cattle,

livestock and even humans. The eggs hatch into

technique is a crucial component of food security

maggots that feed on wounded flesh; these maggots

can kill a full size cow in less than two weeks. The

The technique continues to inform ongoing

fights against other agricultural pests and insects

each year in lost livestock.

carrying infectious pathogens, including the tsetse

Working at field stations in Texas and Florida

fly and the Aedes aegypti mosquito — the primary

culprit in transmission of the Zika virus. It also

and their colleagues suggested the use of sterilised

serves as an inspiration for cutting-edge research

cause the population to collapse through natural

mating behaviour — an approach that was met

with scepticism from peers. The researchers went

for carrier pests is a much-needed field of scientific

on to demonstrate that they could inflict mass

sterilisation of insects through irradiation — a

feat widely lauded as one of the most important

Congress — as well as the public — a little squeamish

developments in pest control and one of the first

or sceptical of the research we invest in, these studies

In 1953, after an unexpected request from

have clearly paid off.”

a Dutch official on the island of Curacao, the

The entomological researchers will be honoured

along with two other teams at the fifth annual

of the technique on the island. After just three

Golden Goose Award Ceremony at the US Library

months, not a single sterile egg could be found

of Congress on 22 September. For more information

on the island. The technique worked even better

about the award, visit http://www.goldengooseaward.