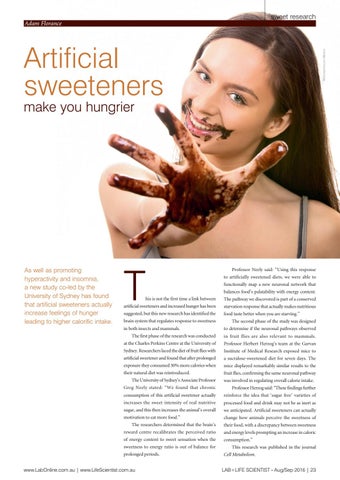 As well as promoting hyperactivity and insomnia, a new study co-led by the University of Sydney has found that artificial sweeteners actually increase feelings of hunger leading to higher calorific intake.

his is not the first time a link between

The pathway we discovered is part of a conserved

artificial sweeteners and increased hunger has been

suggested, but this new research has identified the

food taste better when you are starving.”

brain system that regulates response to sweetness in both insects and mammals.

The first phase of the research was conducted

in fruit flies are also relevant to mammals.

at the Charles Perkins Centre at the University of

Sydney. Researchers laced the diet of fruit flies with

artificial sweetener and found that after prolonged

a sucralose-sweetened diet for seven days. The

exposure they consumed 30% more calories when

their natural diet was reintroduced.

The University of Sydney’s Associate Professor

consumption of this artificial sweetener actually

reinforce the idea that ‘sugar free’ varieties of

processed food and drink may not be as inert as

sugar, and this then increases the animal’s overall

we anticipated. Artificial sweeteners can actually

change how animals perceive the sweetness of

The researchers determined that the brain’s

their food, with a discrepancy between sweetness

and energy levels prompting an increase in caloric

sweetness to energy ratio is out of balance for prolonged periods.

This research was published in the journal Cell Metabolism.