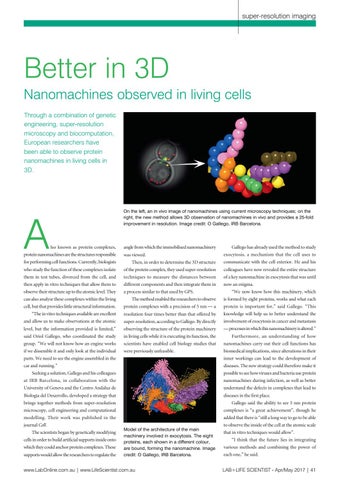 Better in 3D Nanomachines observed in living cells Through a combination of genetic engineering, super-resolution microscopy and biocomputation, European researchers have been able to observe protein nanomachines in living cells in 3D.

On the left, an in vivo image of nanomachines using current microscopy techniques; on the right, the new method allows 3D observation of nanomachines in vivo and provides a 25-fold improvement in resolution. Image credit: O Gallego, IRB Barcelona.

protein nanomachines are the structures responsible

angle from which the immobilised nanomachinery was viewed.

Gallego has already used the method to study exocytosis, a mechanism that the cell uses to

Then, in order to determine the 3D structure

communicate with the cell exterior. He and his

who study the function of these complexes isolate

of the protein complex, they used super-resolution

them in test tubes, divorced from the cell, and

techniques to measure the distances between

of a key nanomachine in exocytosis that was until

then apply in vitro techniques that allow them to

different components and then integrate them in

observe their structure up to the atomic level. They

a process similar to that used by GPS.

“We now know how this machinery, which

can also analyse these complexes within the living

The method enabled the researchers to observe

is formed by eight proteins, works and what each

protein complexes with a precision of 5 nm — a

protein is important for,” said Gallego. “This

“The in vitro techniques available are excellent

resolution four times better than that offered by

knowledge will help us to better understand the

and allow us to make observations at the atomic

super-resolution, according to Gallego. By directly

involvement of exocytosis in cancer and metastasis

level, but the information provided is limited,”

observing the structure of the protein machinery

— processes in which this nanomachinery is altered.”

in living cells while it is executing its function, the

Furthermore, an understanding of how

group. “We will not know how an engine works

nanomachines carry out their cell functions has

if we dissemble it and only look at the individual

biomedical implications, since alterations in their

parts. We need to see the engine assembled in the

inner workings can lead to the development of

diseases. The new strategy could therefore make it

Seeking a solution, Gallego and his colleagues

possible to see how viruses and bacteria use protein

at IRB Barcelona, in collaboration with the

nanomachines during infection, as well as better

University of Geneva and the Centro Andaluz de

understand the defects in complexes that lead to

diseases in the first place.

brings together methods from super-resolution

complexes is “a great achievement”, though he

modelling. Their work was published in the

journal Cell. The scientists began by genetically modifying cells in order to build artificial supports inside onto which they could anchor protein complexes. These supports would allow the researchers to regulate the

Model of the architecture of the main machinery involved in exocytosis. The eight proteins, each shown in a different colour, are bound, forming the nanomachine. Image credit: O Gallego, IRB Barcelona.

to observe the inside of the cell at the atomic scale that in vitro techniques would allow”. “I think that the future lies in integrating various methods and combining the power of each one,” he said.