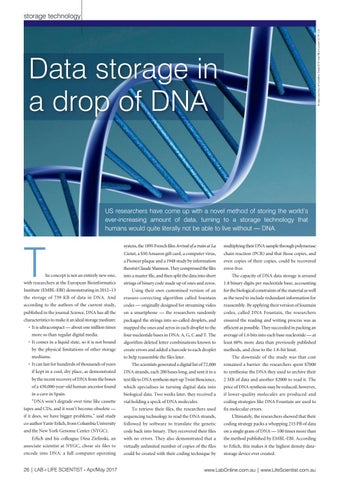 Image courtesy of Caroline Davis2010 (via Flickr) under CC BY 2.0

Data storage in a drop of DNA

US researchers have come up with a novel method of storing the world’s ever-increasing amount of data, turning to a storage technology that humans would quite literally not be able to live without — DNA.

system, the 1895 French film Arrival of a train at La

multiplying their DNA sample through polymerase

chain reaction (PCR) and that those copies, and

a Pioneer plaque and a 1948 study by information

even copies of their copies, could be recovered

he concept is not an entirely new one,

into a master file, and then split the data into short

The capacity of DNA data storage is around

with researchers at the European Bioinformatics

strings of binary code made up of ones and zeros.

1.8 binary digits per nucleotide base, accounting

Using their own customised version of an

for the biological constraints of the material as well

as the need to include redundant information for

according to the authors of the current study,

reassembly. By applying their version of fountain

published in the journal Science, DNA has all the

on a smartphone — the researchers randomly

characteristics to make it an ideal storage medium:

packaged the strings into so-called droplets, and

ensured the reading and writing process was as

• It is ultracompact — about one million times

mapped the ones and zeros in each droplet to the

efficient as possible. They succeeded in packing an

four nucleotide bases in DNA: A, G, C and T. The

average of 1.6 bits into each base nucleotide — at

• It comes in a liquid state, so it is not bound

by the physical limitations of other storage

create errors and added a barcode to each droplet

methods, and close to the 1.8-bit limit.

to help reassemble the files later.

more so than regular digital media.

The downside of the study was that cost

• It can last for hundreds of thousands of years

remained a barrier: the researchers spent $7000

if kept in a cool, dry place, as demonstrated

DNA strands, each 200 bases long, and sent it in a

to synthesise the DNA they used to archive their

by the recent recovery of DNA from the bones

which specialises in turning digital data into

price of DNA synthesis may be reduced, however,

in a cave in Spain.

if lower-quality molecules are produced and

tapes and CDs, and it won’t become obsolete —

To retrieve their files, the researchers used

if it does, we have bigger problems,” said study

Ultimately, the researchers showed that their

followed by software to translate the genetic

code back into binary. They recovered their files

Erlich and his colleague Dina Zielinski, an

with no errors. They also demonstrated that a

the method published by EMBL-EBI. According

virtually unlimited number of copies of the files

to Erlich, this makes it the highest density data-

could be created with their coding technique by