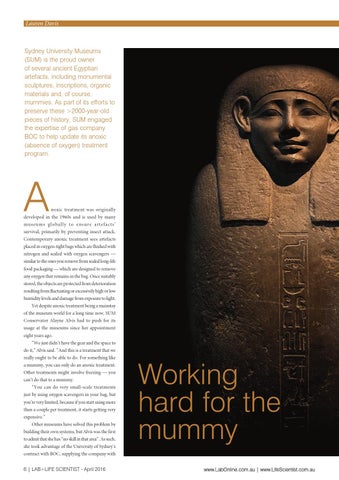 Sydney University Museums (SUM) is the proud owner of several ancient Egyptian artefacts, including monumental sculptures, inscriptions, organic materials and, of course, mummies. As part of its efforts to preserve these &gt;2000-year-old pieces of history, SUM engaged the expertise of gas company BOC to help update its anoxic (absence of oxygen) treatment program.

developed in the 1960s and is used by many museums globally to ensure artefacts’ survival, primarily by preventing insect attack. Contemporary anoxic treatment sees artefacts placed in oxygen-tight bags which are flushed with nitrogen and sealed with oxygen scavengers — similar to the ones you remove from sealed long-life food packaging — which are designed to remove any oxygen that remains in the bag. Once suitably stored, the objects are protected from deterioration resulting from fluctuating or excessively high or low humidity levels and damage from exposure to light. Yet despite anoxic treatment being a mainstay of the museum world for a long time now, SUM Conservator Alayne Alvis had to push for its usage at the museums since her appointment eight years ago. “We just didn’t have the gear and the space to do it,” Alvis said. “And this is a treatment that we really ought to be able to do. For something like a mummy, you can only do an anoxic treatment. Other treatments might involve freezing — you can’t do that to a mummy. “You can do very small-scale treatments just by using oxygen scavengers in your bag, but you’re very limited, because if you start using more than a couple per treatment, it starts getting very expensive.” Other museums have solved this problem by building their own systems, but Alvis was the first to admit that she has “no skill in that area”. As such, she took advantage of the University of Sydney’s

Working hard for the mummy

contract with BOC, supplying the company with