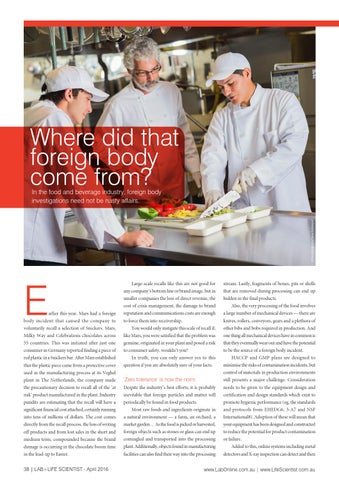 Where did that foreign body come from? ©iStockphoto.com/Steve Debenport

In the food and beverage industry, foreign body investigations need not be nasty affairs.

arlier this year, Mars had a foreign

body incident that caused the company to

any company’s bottom line or brand image, but in

that are removed during processing can end up

smaller companies the loss of direct revenue, the

hidden in the final products.

cost of crisis management, the damage to brand

Also, the very processing of the food involves

reputation and communications costs are enough

a large number of mechanical devices — there are

to force them into receivership.

knives, rollers, conveyors, gears and a plethora of

You would only instigate this scale of recall if,

other bibs and bobs required in production. And

Milky Way and Celebrations chocolates across

like Mars, you were satisfied that the problem was

one thing all mechanical devices have in common is

55 countries. This was initiated after just one

genuine, originated in your plant and posed a risk

that they eventually wear out and have the potential

consumer in Germany reported finding a piece of

to consumer safety, wouldn’t you?

to be the source of a foreign body incident.

red plastic in a Snickers bar. After Mars established that the plastic piece came from a protective cover

In truth, you can only answer yes to this question if you are absolutely sure of your facts.

HACCP and GMP plans are designed to minimise the risks of contamination incidents, but control of materials in production environments

used in the manufacturing process at its Veghel plant in The Netherlands, the company made

‘Zero tolerance’ is now the norm

the precautionary decision to recall all of the ‘at

Despite the industry’s best efforts, it is probably

needs to be given to the equipment design and

inevitable that foreign particles and matter will

certification and design standards which exist to

pundits are estimating that the recall will have a

periodically be found in food products.

Most raw foods and ingredients originate in

and protocols from EHEDG6, 3-A7 and NSF

into tens of millions of dollars. The cost comes

a natural environment — a farm, an orchard, a

International8). Adoption of these will mean that

directly from the recall process, the loss of writing

market garden… As the food is picked or harvested,

your equipment has been designed and constructed

off products and from lost sales in the short and

foreign objects such as stones or glass can end up

to reduce the potential for product contamination

medium term, compounded because the brand

comingled and transported into the processing

damage is occurring in the chocolate boom time

Added to this, online systems including metal

in the lead-up to Easter.

facilities can also find their way into the processing

detectors and X-ray inspection can detect and then