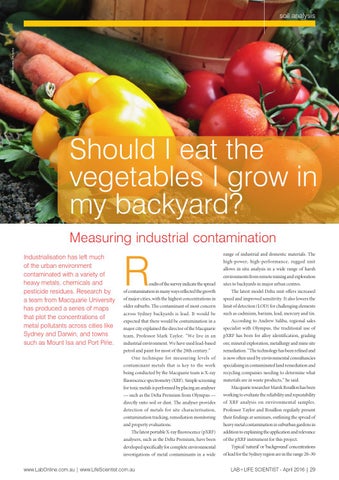 Should I eat the vegetables I grow in my backyard? Measuring industrial contamination Industrialisation has left much of the urban environment contaminated with a variety of heavy metals, chemicals and pesticide residues. Research by a team from Macquarie University has produced a series of maps that plot the concentrations of metal pollutants across cities like Sydney and Darwin, and towns such as Mount Isa and Port Pirie.

esults of the survey indicate the spread

range of industrial and domestic materials. The high-power, high-performance, rugged unit allows in situ analysis in a wide range of harsh environments from remote mining and exploration sites to backyards in major urban centres.

of contamination in many ways reflected the growth

of major cities, with the highest concentrations in

speed and improved sensitivity. It also lowers the

older suburbs. The contaminant of most concern

across Sydney backyards is lead. It would be

such as cadmium, barium, lead, mercury and tin.

expected that there would be contamination in a

According to Andrew Saliba, regional sales

major city explained the director of the Macquarie

specialist with Olympus, the traditional use of

team, Professor Mark Taylor. “We live in an

pXRF has been for alloy identification, grading

industrial environment. We have used lead-based

petrol and paint for most of the 20th century.”

remediation. “The technology has been refined and

One technique for measuring levels of

contaminant metals that is key to the work

specialising in contaminated land remediation and

being conducted by the Macquarie team is X-ray

recycling companies needing to determine what

materials are in waste products,” he said.

for toxic metals is performed by placing an analyser

Macquarie researcher Marek Rouillon has been

— such as the Delta Premium from Olympus —

working to evaluate the reliability and repeatability

directly onto soil or dust. The analyser provides

of XRF analysis on environmental samples.

detection of metals for site characterisation,

their findings at seminars, outlining the spread of

The latest portable X-ray fluorescence (pXRF) analysers, such as the Delta Premium, have been

addition to explaining the application and relevance of the pXRF instrument for this project.

investigations of metal contaminants in a wide