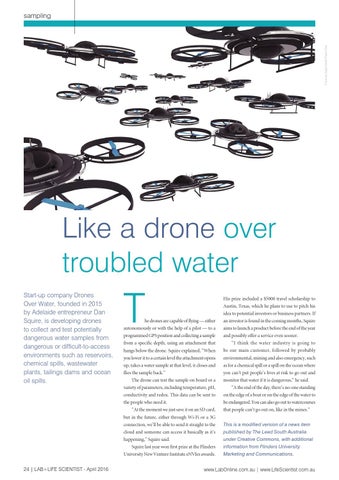 His prize included a $5000 travel scholarship to Austin, Texas, which he plans to use to pitch his idea to potential investors or business partners. If

he drones are capable of flying — either

an investor is found in the coming months, Squire

autonomously or with the help of a pilot — to a

aims to launch a product before the end of the year

and possibly offer a service even sooner.

from a specific depth, using an attachment that

“I think the water industry is going to

hangs below the drone. Squire explained, “When

be our main customer, followed by probably

you lower it to a certain level the attachment opens

environmental, mining and also emergency, such

up, takes a water sample at that level, it closes and

flies the sample back.”

The drone can test the sample on board or a

monitor that water if it is dangerous,” he said.

variety of parameters, including temperature, pH,

“A the end of the day, there’s no-one standing

conductivity and redox. This data can be sent to

the people who need it.

be endangered. You can also go out to watercourses

“At the moment we just save it on an SD card,

that people can’t go out on, like in the mines.”

but in the future, either through Wi-Fi or a 3G connection, we’ll be able to send it straight to the

This is a modified version of a news item

cloud and someone can access it basically as it’s

published by The Lead South Australia

under Creative Commons, with additional