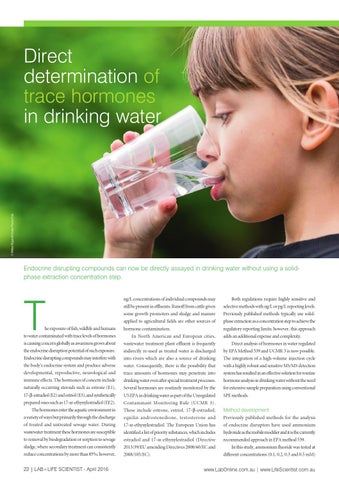 he exposure of fish, wildlife and humans

ng/L concentrations of individual compounds may

Both regulations require highly sensitive and

still be present in effluents. Runoff from cattle given

some growth promoters and sludge and manure

applied to agricultural fields are other sources of

phase extraction as a concentration step to achieve the

regulatory reporting limits; however, this approach

to water contaminated with trace levels of hormones

In North American and European cities,

is causing concern globally as awareness grows about

the endocrine disruption potential of such exposure.

Endocrine disrupting compounds may interfere with

into rivers which are also a source of drinking

The integration of a high-volume injection cycle

water. Consequently, there is the possibility that

with a highly robust and sensitive MS/MS detection

trace amounts of hormones may penetrate into

system has resulted in an effective solution for routine

immune effects. The hormones of concern include

hormone analysis in drinking water without the need

Several hormones are routinely monitored by the

US EPA in drinking water as part of the Unregulated

prepared ones such as 17-α-ethynylestradiol (EE2).

adds an additional expense and complexity.

The hormones enter the aquatic environment in

These include estrone, estriol, 17-β-estradiol,

a variety of ways but primarily through the discharge

Previously published methods for the analysis

of treated and untreated sewage water. During

17-α-ethynylestradiol. The European Union has

of endocrine disruptors have used ammonium

wastewater treatment these hormones are susceptible

hydroxide as the mobile modifier and it is the currently

to removal by biodegradation or sorption to sewage

sludge, where secondary treatment can consistently

reduce concentrations by more than 85%; however,