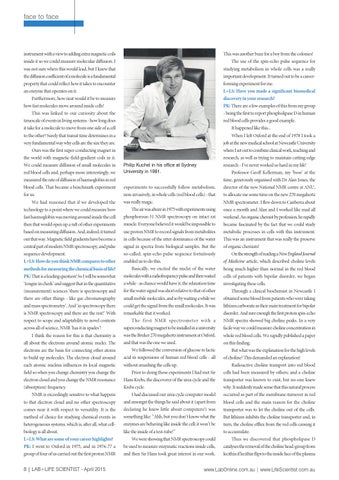 instrument with a view to adding extra magnetic coils

This was another buzz for a boy from the colonies!

inside it so we could measure molecular diffusion. I

The use of the spin-echo pulse sequence for

was not sure where this would lead, but I knew that

studying metabolism in whole cells was a really

the diffusion coefficient of a molecule is a fundamental

important development. It turned out to be a career-

property that could reflect how it takes to encounter

forming experiment for me.

an enzyme that operates on it.

L+LS: Have you made a significant biomedical discovery in your research?

Furthermore, how neat would it be to measure

PK: There are a few examples of this from my group

how fast molecules move around inside cells! This was linked to our curiosity about the

- being the first to report phospholipase D in human

timescale of events in living systems - how long does

to the other? Surely that transit time determines in a

very fundamental way why cells are the size they are.

job at the new medical school at Newcastle University

Ours was the first super-conducting magnet in

where I set out to combine clinical work, teaching and

the world with magnetic-field-gradient coils in it.

research, as well as trying to maintain cutting-edge

We could measure diffusion of small molecules in red blood cells and, perhaps more interestingly, we

Philip Kuchel in his office at Sydney University in 1981.

research - I’ve never worked so hard in my life! Professor Geoff Kellerman, my ‘boss’ at the

measured the rate of diffusion of haemoglobin in red

director of the new National NMR centre at ANU,

to allocate me some time on the new 270 megahertz

NMR spectrometer. I flew down to Canberra about

The air was abuzz in 1975 with experiments using

once a month and Alan and I worked like mad all

fast haemoglobin was moving around inside the cell

weekend. An organic chemist by profession, he rapidly

then that would open up a raft of other experiments

muscle. Everyone believed it would be impossible to

became fascinated by the fact that we could study

based on measuring diffusion. And, indeed, it turned

use proton NMR to record signals from metabolites

metabolic processes in cells with this instrument.

out that way. Magnetic field gradients have become a

in cells because of the utter dominance of the water

This was an instrument that was really the preserve

signal in spectra from biological samples. But the

L+LS: How do you think NMR compares to other

enabled us to do this.

On the strength of reading a New England Journal of Medicine article, which described choline levels

methods for measuring the chemical basis of life?

Basically, we excited the nuclei of the water

being much higher than normal in the red blood

PK: That is a leading question! So I will be somewhat

molecules with a radiofrequency pulse and then waited

cells of patients with bipolar disorder, we began

‘tongue in cheek’ and suggest that in the quantitative

a while - as chance would have it, the relaxation time

(measurement) sciences ‘there is spectroscopy and

for the water signal was short relative to that of other

Through a clinical biochemist in Newcastle I

small mobile molecules, and so by waiting a while we

obtained some blood from patients who were taking

and mass spectrometry’. And ‘in spectroscopy there

could get the signal from the small molecules. It was

lithium carbonate as their main treatment for bipolar

is NMR spectroscopy and there are the rest!’ With

remarkable that it worked.

disorder. And sure enough the first proton spin-echo

respect to scope and adaptability to novel contexts across all of science, NMR ‘has it in spades’! I think the reason for this is that chemistry is all about the electrons around atomic nuclei. The

The first NMR spectrometer with a

superconducting magnet to be installed in a university

facile way we could measure choline concentration in

was the Bruker 270 megahertz instrument at Oxford,

and that was the one we used.

electrons are the basis for connecting other atoms

We followed the conversion of glucose to lactic

to build up molecules. The electron cloud around

acid in suspensions of human red blood cells - all

without smashing the cells up.

But what was the explanation for the high levels of choline? This demanded an explanation! Radioactive choline transport into red blood

Prior to doing those experiments I had met Sir

cells had been measured by others; and a choline

electron cloud and you change the NMR resonance

Hans Krebs, the discoverer of the urea cycle and the

transporter was known to exist, but no-one knew

why. It suddenly made sense that this natural process

NMR is exceedingly sensitive to what happens

I had discussed our urea cycle computer model

occurred as part of the membrane-turnover in red

to that electron cloud and no other spectroscopy

and amongst the things he said about it (apart from

blood cells and the main reason for the choline

comes near it with respect to versatility. It is the

declaring he knew little about computers!) was

transporter was to let the choline out of the cells.

method of choice for studying chemical events in

something like: “Ahh, but you don’t know what the

But lithium inhibits the choline transporter and, in

heterogeneous systems, which is, after all, what cell-

enzymes are behaving like inside the cell; it won’t be

turn, the choline efflux from the red cells causing it

biology is all about.

We were showing that NMR spectroscopy could

Thus we discovered that phospholipase D

be used to measure enzymatic reactions inside cells,

catalyses the removal of the choline head-group from

group of four of us carried out the first proton NMR

and then Sir Hans took great interest in our work.

lecithin if lecithin flips to the inside face of the plasma

L+LS: What are some of your career highlights?