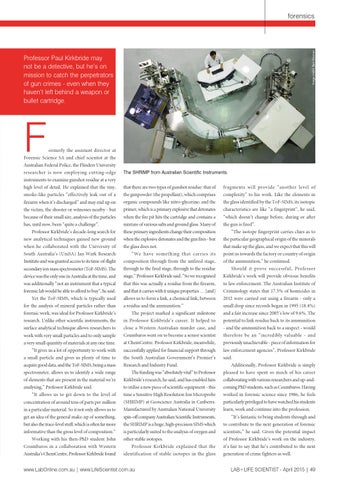 Professor Paul Kirkbride may not be a detective, but he’s on mission to catch the perpetrators of gun crimes - even when they haven’t left behind a weapon or bullet cartridge.

ormerly the assistant director at

The SHRIMP from Australian Scientific Instruments.

instruments to examine gunshot residue at a very high level of detail. He explained that the tiny,

that there are two types of gunshot residue: that of

fragments will provide “another level of

smoke-like particles “effectively leak out of a

the gunpowder (the propellant), which comprises

firearm when it’s discharged” and may end up on

the glass identified by the ToF-SIMS, its isotopic

the victim, the shooter or witnesses nearby - but

primer, which is a primary explosive that detonates

because of their small size, analysis of the particles

when the fire pit hits the cartridge and contains a

“which doesn’t change before, during or after

has, until now, been “quite a challenge”.

mixture of various salts and ground glass. Many of

the gun is fired”.

these primary ingredients change their composition

“The isotope fingerprint carries clues as to

when the explosive detonates and the gun fires - but

the particular geographical origin of the minerals

when he collaborated with the University of

the glass does not.

that make up the glass, and we expect that this will

“We have something that carries its

composition through from the unfired stage,

Should it prove successful, Professor

device was the only one in Australia at the time, and

was additionally “not an instrument that a typical

that this was actually a residue from the firearm,

to law enforcement. The Australian Institute of

forensic lab would be able to afford to buy”, he said.

and that it carries with it unique properties … [and]

Criminology states that 17.5% of homicides in

Yet the ToF-SIMS, which is typically used

allows us to form a link, a chemical link, between

a residue and the ammunition.”

for the analysis of mineral particles rather than

point us towards the factory or country of origin of the ammunition,” he continued.

The project marked a significant milestone

research. Unlike other scientific instruments, the

in Professor Kirkbride’s career. It helped to

potential to link residue back to its ammunition

- and the ammunition back to a suspect - would

work with very small particles and to only sample

Coumbaros went on to become a senior scientist

therefore be an “incredibly valuable - and

a very small quantity of materials at any one time.

previously unachievable - piece of information for

“It gives us a lot of opportunity to work with

successfully applied for financial support through

a small particle and gives us plenty of time to

acquire good data, and the ToF-SIMS, being a mass

spectrometer, allows us to identify a wide range

The funding was “absolutely vital” to Professor

pleased to have spent so much of his career

of elements that are present in the material we’re

Kirkbride’s research, he said, and has enabled him

collaborating with various researchers and up-and-

to utilise a new piece of scientific equipment - this

coming PhD students, such as Coumbaros. Having

“It allows us to get down to the level of

worked in forensic science since 1986, he feels

concentration of around tens of parts per million

(SHRIMP) at Geoscience Australia in Canberra.

particularly privileged to have watched his students

in a particular material. So it not only allows us to

learn, work and continue into the profession.

get an idea of the general make-up of something,

“It’s fantastic to bring students through and

but also the trace-level stuff, which is often far more

the SHRIMP is a huge, high-precision SIMS which

to contribute to the next generation of forensic

informative than the gross level of composition.”

is particularly suited to the analysis of oxygen and

scientists,” he said. Given the potential impact

of Professor Kirkbride’s work on the industry,

Professor Kirkbride explained that the

identification of stable isotopes in the glass

it’s fair to say that he’s contributed to the next generation of crime fighters as well.