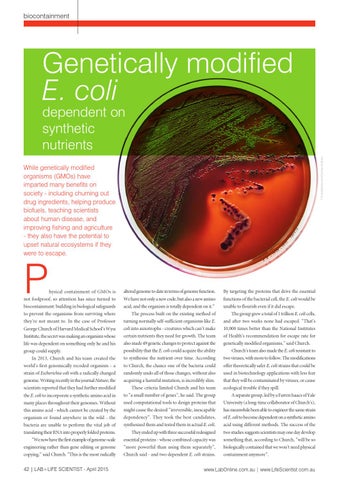 dependent on synthetic nutrients While genetically modified organisms (GMOs) have imparted many benefits on society - including churning out drug ingredients, helping produce biofuels, teaching scientists about human disease, and improving fishing and agriculture - they also have the potential to upset natural ecosystems if they were to escape.

hysical containment of GMOs is

altered genome to date in terms of genome function.

By targeting the proteins that drive the essential

not foolproof, so attention has since turned to

We have not only a new code, but also a new amino

functions of the bacterial cell, the E. coli would be

acid, and the organism is totally dependent on it.”

unable to flourish even if it did escape.

to prevent the organisms from surviving where

The process built on the existing method of

The group grew a total of 1 trillion E. coli cells,

they’re not meant to. In the case of Professor

and after two weeks none had escaped. “That’s

10,000 times better than the National Institutes

Institute, the secret was making an organism whose

certain nutrients they need for growth. The team

of Health’s recommendation for escape rate for

life was dependent on something only he and his

also made 49 genetic changes to protect against the

possibility that the E. coli could acquire the ability

Church’s team also made the E. coli resistant to

In 2013, Church and his team created the

to synthesise the nutrient over time. According

to Church, the chance one of the bacteria could

offer theoretically safer E. coli strains that could be

strain of Escherichia coli with a radically changed

randomly undo all of those changes, without also

genome. Writing recently in the journal Nature, the

that they will be contaminated by viruses, or cause

scientists reported that they had further modified

These criteria limited Church and his team

the E. coli to incorporate a synthetic amino acid in

to “a small number of genes”, he said. The group

A separate group, led by a Farren Isaacs of Yale

many places throughout their genomes. Without

University (a long-time collaborator of Church’s),

this amino acid - which cannot be created by the

has meanwhile been able to engineer the same strain

organism or found anywhere in the wild - the

dependency”. They took the best candidates,

of E. coli to become dependent on a synthetic amino

bacteria are unable to perform the vital job of

synthesised them and tested them in actual E. coli.

acid using different methods. The success of the

They ended up with three successful redesigned

“We now have the first example of genome-scale

essential proteins - whose combined capacity was

something that, according to Church, “will be so

engineering rather than gene editing or genome

“more powerful than using them separately”,

copying,” said Church. “This is the most radically

ecological trouble if they spill.