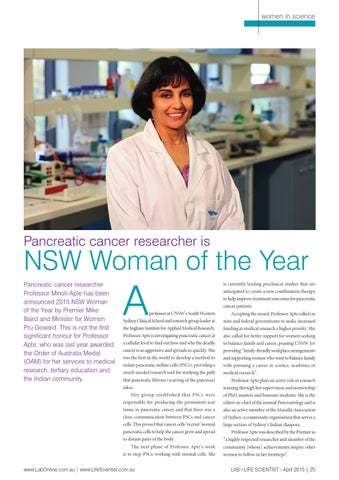 NSW Woman of the Year Pancreatic cancer researcher Professor Minoti Apte has been announced 2015 NSW Woman of the Year by Premier Mike Baird and Minister for Women Pru Goward. This is not the first significant honour for Professor Apte, who was last year awarded the Order of Australia Medal (OAM) for her services to medical research, tertiary education and the Indian community.

funding in medical research a higher priority. She

a cellular level to find out how and why the deadly

to balance family and career, praising UNSW for

cancer is so aggressive and spreads so quickly. She

was the first in the world to develop a method to

and supporting women who want to balance family

with pursuing a career in science, academia or

that pancreatic fibrosis (scarring of the pancreas) takes.

Her group established that PSCs were

of PhD, masters and honours students. She is the

responsible for producing the prominent scar

editor-in-chief of the journal Pancreatology and is

tissue in pancreatic cancer and that there was a

also an active member of the Marathi Association

close communication between PSCs and cancer

of Sydney, a community organisation that serves a

pancreatic cells to help the cancer grow and spread to distant parts of the body. The next phase of Professor Apte’s work is to stop PSCs working with normal cells. She

Professor Apte was described by the Premier as “a highly respected researcher and member of the community [whose] achievements inspire other women to follow in her footsteps”.