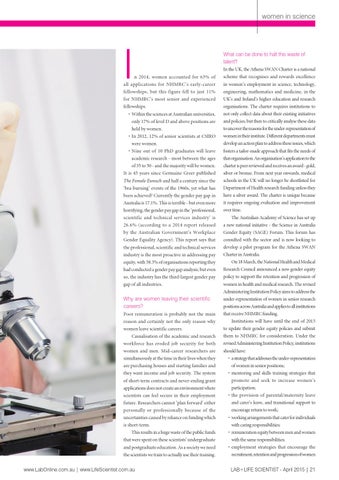 What can be done to halt this waste of talent? In the UK, the Athena SWAN Charter is a national n 2014, women accounted for 63% of

scheme that recognises and rewards excellence

all applications for NHMRC’s early-career

in women’s employment in science, technology,

fellowships, but this figure fell to just 11%

engineering, mathematics and medicine, in the

for NHMRC’s most senior and experienced

organisations. The charter requires institutions to

• Within the sciences at Australian universities,

not only collect data about their existing initiatives

only 17% of level D and above positions are

and policies, but then to critically analyse these data

to uncover the reasons for the under-representation of

women in their institute. Different departments must develop an action plan to address these issues, which

• Nine out of 10 PhD graduates will leave

fosters a tailor-made approach that fits the needs of

academic research - most between the ages

charter is peer reviewed and receives an award - gold,

It is 45 years since Germaine Greer published

silver or bronze. From next year onwards, medical

The Female Eunuch and half a century since the

schools in the UK will no longer be shortlisted for

Department of Health research funding unless they

been achieved? Currently the gender pay gap in

have a silver award. The charter is unique because

it requires ongoing evaluation and improvement

horrifying, the gender pay gap in the ‘professional,

scientific and technical services industry’ is

The Australian Academy of Science has set up

a new national initiative - the Science in Australia

by the Australian Government’s Workplace

consulted with the sector and is now looking to

the professional, scientific and technical services

develop a pilot program for the Athena SWAN

industry is the most proactive in addressing pay

equity, with 58.3% of organisations reporting they

On 18 March, the National Health and Medical

had conducted a gender pay gap analysis; but even

so, the industry has the third-largest gender pay

gap of all industries.

women in health and medical research. The revised Administering Institution Policy aims to address the

Why are women leaving their scientific careers?

under-representation of women in senior research

Poor remuneration is probably not the main

reason and certainly not the only reason why women leave scientific careers.

Casualisation of the academic and research

them to NHMRC for consideration. Under the

workforce has eroded job security for both

women and men. Mid-career researchers are

• a strategy that addresses the under-representation of women in senior positions;

they want income and job security. The system

• mentoring and skills training strategies that

of short-term contracts and never-ending grant

promote and seek to increase women’s

applications does not create an environment where

scientists can feel secure in their employment

• the provision of parental/maternity leave

and carer’s leave, and transitional support to

personally or professionally because of the uncertainties caused by reliance on funding which is short-term. This results in a huge waste of the public funds that were spent on these scientists’ undergraduate

and postgraduate education. As a society we need

• employment strategies that encourage the

the scientists we train to actually use their training.

recruitment, retention and progression of women