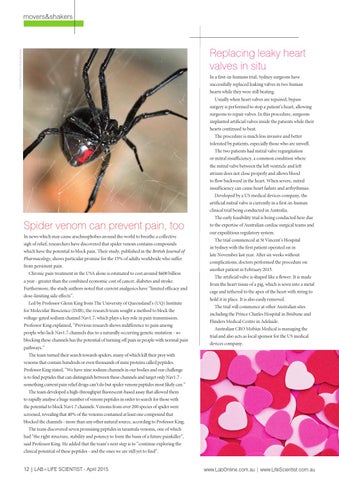 Replacing leaky heart valves in situ In a first-in-humans trial, Sydney surgeons have successfully replaced leaking valves in two human hearts while they were still beating. Usually when heart valves are repaired, bypass surgery is performed to stop a patient’s heart, allowing surgeons to repair valves. In this procedure, surgeons implanted artificial valves inside the patients while their hearts continued to beat. The procedure is much less invasive and better tolerated by patients, especially those who are unwell. The two patients had mitral valve regurgitation or mitral insufficiency, a common condition where the mitral valve between the left ventricle and left atrium does not close properly and allows blood to flow backward in the heart. When severe, mitral insufficiency can cause heart failure and arrhythmias. Developed by a US medical devices company, the artificial mitral valve is currently in a first-in-human clinical trial being conducted in Australia.

Spider venom can prevent pain, too In news which may cause arachnophobes around the world to breathe a collective sigh of relief, researchers have discovered that spider venom contains compounds which have the potential to block pain. Their study, published in the British Journal of Pharmacology, shows particular promise for the 15% of adults worldwide who suffer from persistent pain. Chronic pain treatment in the USA alone is estimated to cost around $600 billion a year - greater than the combined economic cost of cancer, diabetes and stroke. Furthermore, the study authors noted that current analgesics have “limited efficacy and dose-limiting side effects”. Led by Professor Glenn King from The University of Queensland’s (UQ) Institute for Molecular Bioscience (IMB), the research team sought a method to block the voltage-gated sodium channel Nav1.7, which plays a key role in pain transmission. Professor King explained, “Previous research shows indifference to pain among people who lack Nav1.7 channels due to a naturally occurring genetic mutation - so blocking these channels has the potential of turning off pain in people with normal pain pathways.”

The early feasibility trial is being conducted here due to the expertise of Australian cardiac surgical teams and our expeditious regulatory system. The trial commenced at St Vincent’s Hospital in Sydney with the first patient operated on in late November last year. After six weeks without complications, doctors performed the procedure on another patient in February 2015. The artificial valve is shaped like a flower. It is made from the heart tissue of a pig, which is sewn into a metal cage and tethered to the apex of the heart with string to hold it in place. It is also easily removed. The trial will commence at other Australian sites including the Prince Charles Hospital in Brisbane and Flinders Medical Centre in Adelaide. Australian CRO Mobius Medical is managing the trial and also acts as local sponsor for the US medical devices company.

The team turned their search towards spiders, many of which kill their prey with venoms that contain hundreds or even thousands of mini proteins called peptides. Professor King stated, “We have nine sodium channels in our bodies and our challenge is to find peptides that can distinguish between these channels and target only Nav1.7 something current pain relief drugs can’t do but spider venom peptides most likely can.” The team developed a high-throughput fluorescent-based assay that allowed them to rapidly analyse a huge number of venom peptides in order to search for those with the potential to block Nav1.7 channels. Venoms from over 200 species of spider were screened, revealing that 40% of the venoms contained at least one compound that blocked the channels - more than any other natural source, according to Professor King. The team discovered seven promising peptides in tarantula venoms, one of which had “the right structure, stability and potency to form the basis of a future painkiller”, said Professor King. He added that the team’s next step is to “continue exploring the clinical potential of these peptides - and the ones we are still yet to find”.