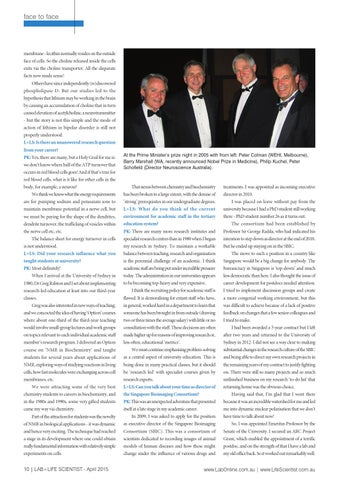 membrane - lecithin normally resides on the outside face of cells. So the choline released inside the cells exits via the choline transporter. All the disparate facts now made sense! Others have since independently (re)discovered phospholipase D. But our studies led to the hypothesis that lithium may be working in the brain by causing an accumulation of choline that in turn caused elevation of acetylcholine, a neurotransmitter - but the story is not this simple and the mode of action of lithium in bipolar disorder is still not properly understood. L+LS: Is there an unanswered research question from your career? PK: Yes, there are many, but a Holy Grail for me is: we don’t know where half of the ATP turnover that occurs in red blood cells goes! And if that’s true for

red blood cells, what is it like for other cells in the body, for example, a neuron?

That nexus between chemistry and biochemistry

treatments. I was appointed as incoming executive

We think we know what the energy requirements

has been broken to a large extent, with the demise of

are for pumping sodium and potassium ions to

‘strong’ prerequisites in our undergraduate degrees.

I was placed on leave without pay from the

maintain membrane potential in a nerve cell, but

L+LS: What do you think of the current

university because I had a PhD student still working

we must be paying for the shape of the dendrites,

environment for academic staff in the tertiary

there - PhD student number 26 as it turns out.

dendrite turnover, the trafficking of vesicles within

PK: There are many more research institutes and

Professor Sir George Radda, who had indicated his

specialist research centres than in 1980 when I began

intention to step down as director at the end of 2010.

my research in Sydney. To maintain a workable

But he ended up staying on in the SBIC.

L+LS: Did your research influence what you

balance between teaching, research and organisation

The move to such a position in a country like

is the perennial challenge of an academic. I think

Singapore would be a big change for anybody. The

academic staff are being put under incredible pressure

bureaucracy in Singapore is ‘top-down’ and much

today. The administration in our universities appears

less democratic than here. I also thought the issue of

to be becoming top-heavy and very expensive.

The balance sheet for energy turnover in cells

When I arrived at the University of Sydney in 1980, Dr Greg Ralston and I set about implementing

The consortium had been established by

I think the recruiting policy for academic staff is

I tried to implement discussion groups and create

flawed. It is demoralising for extant staff who have,

a more congenial working environment, but this

Greg was also interested in new ways of teaching;

in general, worked hard in a department to learn that

was difficult to achieve because of a lack of positive

and we concocted the idea of having ‘Option’ courses

someone has been brought in from outside (drawing

feedback on changes that a few senior colleagues and

where about one-third of the third-year teaching

two or three times the average salary) with little or no

I tried to make.

consultation with the staff. These decisions are often

I had been awarded a 5-year contract but I left

on topics relevant to each individual academic staff

made higher up for reasons of improving research or,

after two years and returned to the University of

research-led education at least into our third-year classes.

course on ‘NMR in Biochemistry’ and taught

We must continue emphasising problem-solving

substantial changes in the research culture of the SBIC

students for several years about applications of

as a central aspect of university education. This is

and being able to direct my own research projects in

being done in many practical classes, but it should

the remaining years of my contract to justify fighting

cells, how fast molecules were exchanging across cell

be ‘research led’ with specialist courses given by

on. There were still so many projects and so much

L+LS: Can you talk about your time as director of

returning home was the obvious choice.

We were attracting some of the very best chemistry students to careers in biochemistry, and

PK: This was an unexpected adventure that presented

because it was an incredible watershed for me and led

came my way via chemistry.

itself at a late stage in my academic career.

me into dynamic nuclear polarisation that we don’t

Having said that, I’m glad that I went there

Part of the attraction for students was the novelty

of NMR in biological applications - it was dynamic

as executive director of the Singapore Bioimaging

So, I was appointed Emeritus Professor by the

and hence very exciting. The technique had reached

Consortium (SBIC). This was a consortium of

Senate of the University. I secured an ARC Project

a stage in its development where one could obtain

Grant, which enabled the appointment of a terrific

postdoc, and on the strength of that I have a lab and

change under the influence of various drugs and

my old office back. So it worked out remarkably well.

have time to talk about now!