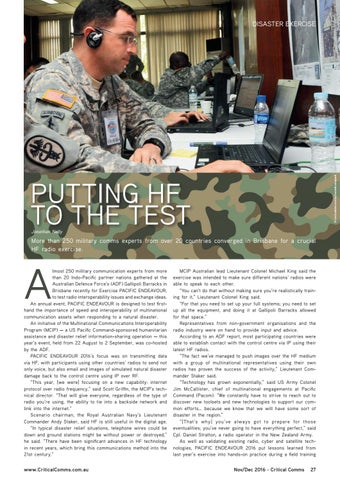 More than 250 military comms experts from over 20 countries converged in Brisbane for a crucial HF radio exercise.

lmost 250 military communication experts from more than 20 Indo-Pacific partner nations gathered at the Australian Defence Force’s (ADF) Gallipoli Barracks in Brisbane recently for Exercise PACIFIC ENDEAVOUR, to test radio interoperability issues and exchange ideas. An annual event, PACIFIC ENDEAVOUR is designed to test firsthand the importance of speed and interoperability of multinational communication assets when responding to a natural disaster. An initiative of the Multinational Communications Interoperability Program (MCIP) — a US Pacific Command-sponsored humanitarian assistance and disaster relief information-sharing operation — this year’s event, held from 22 August to 2 September, was co-hosted by the ADF. PACIFIC ENDEAVOUR 2016’s focus was on transmitting data via HF, with participants using other countries’ radios to send not only voice, but also email and images of simulated natural disaster damage back to the control centre using IP over RF. “This year, [we were] focusing on a new capability: internet protocol over radio frequency,” said Scott Griffin, the MCIP’s technical director. “That will give everyone, regardless of the type of radio you’re using, the ability to tie into a backside network and link into the internet.” Scenario chairman, the Royal Australian Navy’s Lieutenant Commander Andy Staker, said HF is still useful in the digital age. “In typical disaster relief situations, telephone wires could be down and ground stations might be without power or destroyed,” he said. “There have been significant advances in HF technology in recent years, which bring this communications method into the 21st century.”

MCIP Australian lead Lieutenant Colonel Michael King said the exercise was intended to make sure different nations’ radios were able to speak to each other. “You can’t do that without making sure you’re realistically training for it,” Lieutenant Colonel King said. “For that you need to set up your full systems; you need to set up all the equipment, and doing it at Gallipoli Barracks allowed for that space.” Representatives from non-government organisations and the radio industry were on hand to provide input and advice. According to an ADF report, most participating countries were able to establish contact with the control centre via IP using their latest HF radios. “The fact we’ve managed to push images over the HF medium with a group of multinational representatives using their own radios has proven the success of the activity,” Lieutenant Commander Staker said. “Technology has grown exponentially,” said US Army Colonel Jim McCallister, chief of multinational engagements at Pacific Command (Pacom). “We constantly have to strive to reach out to discover new toolsets and new technologies to support our common efforts… because we know that we will have some sort of disaster in the region.” “[That’s why] you’ve always got to prepare for those eventualities; you’ve never going to have everything perfect,” said Cpl. Daniel Stratton, a radio operator in the New Zealand Army. As well as validating existing radio, cyber and satellite technologies, PACIFIC ENDEAVOUR 2016 put lessons learned from last year’s exercise into hands-on practice during a field training