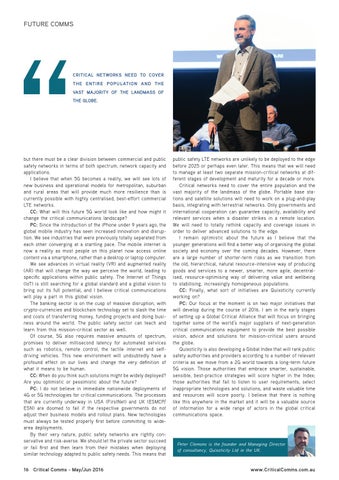 CRITICAL NETWORKS NEED TO COVER THE ENTIRE POPUL ATION AND THE VAST MAJORITY OF THE LANDMASS OF THE GLOBE.

but there must be a clear division between commercial and public safety networks in terms of both spectrum, network capacity and applications. I believe that when 5G becomes a reality, we will see lots of new business and operational models for metropolitan, suburban and rural areas that will provide much more resilience than is currently possible with highly centralised, best-effort commercial LTE networks. CC: What will this future 5G world look like and how might it change the critical communications landscape? PC: Since the introduction of the iPhone under 9 years ago, the global mobile industry has seen increased innovation and disruption. We see industries that were previously totally separated from each other converging at a startling pace. The mobile internet is now a reality as most people on this planet now access online content via a smartphone, rather than a desktop or laptop computer. We see advances in virtual reality (VR) and augmented reality (AR) that will change the way we perceive the world, leading to specific applications within public safety. The Internet of Things (IoT) is still searching for a global standard and a global vision to bring out its full potential, and I believe critical communications will play a part in this global vision. The banking sector is on the cusp of massive disruption, with crypto-currencies and blockchain technology set to slash the time and costs of transferring money, funding projects and doing business around the world. The public safety sector can teach and learn from this mission-critical sector as well. Of course, 5G also requires massive amounts of spectrum, promises to deliver millisecond latency for automated services such as robotics, remote control, the tactile internet and selfdriving vehicles. This new environment will undoubtedly have a profound effect on our lives and change the very definition of what it means to be human. CC: When do you think such solutions might be widely deployed? Are you optimistic or pessimistic about the future? PC: I do not believe in immediate nationwide deployments of 4G or 5G technologies for critical communications. The processes that are currently underway in USA (FirstNet) and UK (ESMCP/ ESN) are doomed to fail if the respective governments do not adjust their business models and rollout plans. New technologies must always be tested properly first before committing to widearea deployments. By their very nature, public safety networks are rightly conservative and risk-averse. We should let the private sector succeed or fail first and then learn from their mistakes when deploying similar technology adapted to public safety needs. This means that

public safety LTE networks are unlikely to be deployed to the edge before 2025 or perhaps even later. This means that we will need to manage at least two separate mission-critical networks at different stages of development and maturity for a decade or more. Critical networks need to cover the entire population and the vast majority of the landmass of the globe. Portable base stations and satellite solutions will need to work on a plug-and-play basis, integrating with terrestrial networks. Only governments and international cooperation can guarantee capacity, availability and relevant services when a disaster strikes in a remote location. We will need to totally rethink capacity and coverage issues in order to deliver advanced solutions to the edge. I remain optimistic about the future as I believe that the younger generations will find a better way of organising the global society and economy over the coming decades. However, there are a large number of shorter-term risks as we transition from the old, hierarchical, natural resource-intensive way of producing goods and services to a newer, smarter, more agile, decentralised, resource-optimising way of delivering value and wellbeing to stabilising, increasingly homogeneous populations. CC: Finally, what sort of initiatives are Quixoticity currently working on? PC: Our focus at the moment is on two major initiatives that will develop during the course of 2016. I am in the early stages of setting up a Global Critical Alliance that will focus on bringing together some of the worldâ&#x20AC;&#x2122;s major suppliers of next-generation critical communications equipment to provide the best possible vision, advice and solutions for mission-critical users around the globe. Quixoticity is also developing a Global Index that will rank public safety authorities and providers according to a number of relevant criteria as we move from a 2G world towards a long-term future 5G vision. Those authorities that embrace smarter, sustainable, sensible, best-practice strategies will score higher in the Index; those authorities that fail to listen to user requirements, select inappropriate technologies and solutions, and waste valuable time and resources will score poorly. I believe that there is nothing like this anywhere in the market and it will be a valuable source of information for a wide range of actors in the global critical communications space.

Peter Clemons is the founder and Managing Director of consultancy, Quixoticity Ltd in the UK.