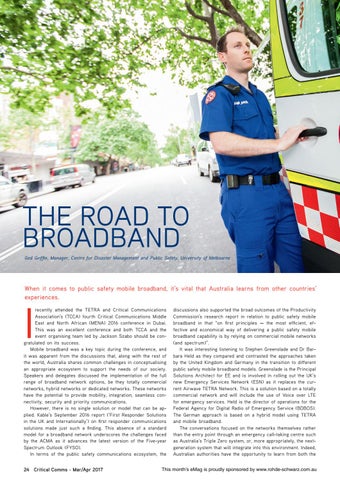 When it comes to public safety mobile broadband, it’s vital that Australia learns from other countries’ experiences.

recently attended the TETRA and Critical Communications Association’s (TCCA) fourth Critical Communications Middle East and North African (MENA) 2016 conference in Dubai. This was an excellent conference and both TCCA and the event organising team led by Jackson Szabo should be congratulated on its success. Mobile broadband was a key topic during the conference, and it was apparent from the discussions that, along with the rest of the world, Australia shares common challenges in conceptualising an appropriate ecosystem to support the needs of our society. Speakers and delegates discussed the implementation of the full range of broadband network options, be they totally commercial networks, hybrid networks or dedicated networks. These networks have the potential to provide mobility, integration, seamless connectivity, security and priority communications. However, there is no single solution or model that can be applied. Kable’s September 2016 report (‘First Responder Solutions in the UK and Internationally’) on first responder communications solutions made just such a finding. This absence of a standard model for a broadband network underscores the challenges faced by the ACMA as it advances the latest version of the Five-year Spectrum Outlook (FYSO). In terms of the public safety communications ecosystem, the

discussions also supported the broad outcomes of the Productivity Commission’s research report in relation to public safety mobile broadband in that “on first principles — the most efficient, effective and economical way of delivering a public safety mobile broadband capability is by relying on commercial mobile networks (and spectrum)”. It was interesting listening to Stephen Greenslade and Dr Barbara Held as they compared and contrasted the approaches taken by the United Kingdom and Germany in the transition to different public safety mobile broadband models. Greenslade is the Principal Solutions Architect for EE and is involved in rolling out the UK’s new Emergency Services Network (ESN) as it replaces the current Airwave TETRA Network. This is a solution based on a totally commercial network and will include the use of Voice over LTE for emergency services. Held is the director of operations for the Federal Agency for Digital Radio of Emergency Service (BDBOS). The German approach is based on a hybrid model using TETRA and mobile broadband. The conversations focused on the networks themselves rather than the entry point through an emergency call-taking centre such as Australia’s Triple Zero system, or, more appropriately, the nextgeneration system that will integrate into this environment. Indeed, Australian authorities have the opportunity to learn from both the

This month’s eMag is proudly sponsored by www.rohde-schwarz.com.au