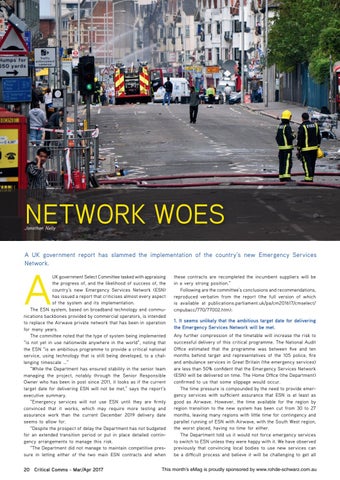 A UK government report has slammed the implementation of the country’s new Emergency Services Network.

UK government Select Committee tasked with appraising the progress of, and the likelihood of success of, the country’s new Emergency Services Network (ESN) has issued a report that criticises almost every aspect of the system and its implementation. The ESN system, based on broadband technology and communications backbones provided by commercial operators, is intended to replace the Airwave private network that has been in operation for many years. The committee noted that the type of system being implemented “is not yet in use nationwide anywhere in the world”, noting that the ESN “is an ambitious programme to provide a critical national service, using technology that is still being developed, to a challenging timescale …” “While the Department has ensured stability in the senior team managing the project, notably through the Senior Responsible Owner who has been in post since 2011, it looks as if the current target date for delivering ESN will not be met,” says the report’s executive summary. “Emergency services will not use ESN until they are firmly convinced that it works, which may require more testing and assurance work than the current December 2019 delivery date seems to allow for. “Despite the prospect of delay the Department has not budgeted for an extended transition period or put in place detailed contingency arrangements to manage this risk. “The Department did not manage to maintain competitive pressure in letting either of the two main ESN contracts and when

these contracts are recompleted the incumbent suppliers will be in a very strong position.” Following are the committee’s conclusions and recommendations, reproduced verbatim from the report (the full version of which is available at publications.parliament.uk/pa/cm201617/cmselect/ cmpubacc/770/77002.htm):

1. It seems unlikely that the ambitious target date for delivering the Emergency Services Network will be met. Any further compression of the timetable will increase the risk to successful delivery of this critical programme. The National Audit Office estimated that the programme was between five and ten months behind target and representatives of the 105 police, fire and ambulance services in Great Britain (the emergency services) are less than 50% confident that the Emergency Services Network (ESN) will be delivered on time. The Home Office (the Department) confirmed to us that some slippage would occur. The time pressure is compounded by the need to provide emergency services with sufficient assurance that ESN is at least as good as Airwave. However, the time available for the region by region transition to the new system has been cut from 30 to 27 months, leaving many regions with little time for contingency and parallel running of ESN with Airwave, with the South West region, the worst placed, having no time for either. The Department told us it would not force emergency services to switch to ESN unless they were happy with it. We have observed previously that convincing local bodies to use new services can be a difficult process and believe it will be challenging to get all

This month’s eMag is proudly sponsored by www.rohde-schwarz.com.au