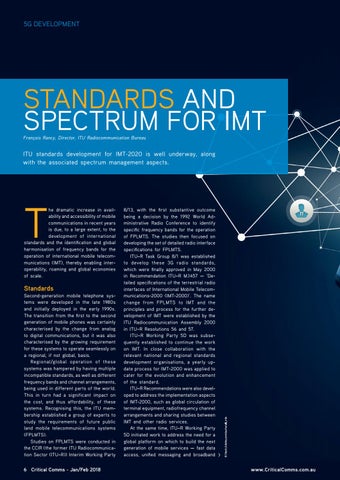 he dramatic increase in availability and accessibility of mobile communications in recent years is due, to a large extent, to the development of international standards and the identification and global harmonisation of frequency bands for the operation of international mobile telecommunications (IMT), thereby enabling interoperability, roaming and global economies of scale.

Standards Second-generation mobile telephone systems were developed in the late 1980s and initially deployed in the early 1990s. The transition from the first to the second generation of mobile phones was certainly characterised by the change from analog to digital communications, but it was also characterised by the growing requirement for these systems to operate seamlessly on a regional, if not global, basis. Regional/global operation of these systems was hampered by having multiple incompatible standards, as well as different frequency bands and channel arrangements, being used in different parts of the world. This in turn had a significant impact on the cost, and thus affordability, of these systems. Recognising this, the ITU membership established a group of experts to study the requirements of future public land mobile telecommunications systems (FPLMTS). Studies on FPLMTS were conducted in the CCIR (the former ITU Radiocommunication Sector (ITU–R)) Interim Working Party

8/13, with the first substantive outcome being a decision by the 1992 World Administrative Radio Conference to identify specific frequency bands for the operation of FPLMTS. The studies then focused on developing the set of detailed radio interface specifications for FPLMTS. ITU–R Task Group 8/1 was established to develop these 3G radio standards, which were finally approved in May 2000 in Recommendation ITU–R M.1457 — ‘Detailed specifications of the terrestrial radio interfaces of International Mobile Telecommunications-2000 (IMT-2000)’. The name change from FPLMTS to IMT and the principles and process for the further development of IMT were established by the ITU Radiocommunication Assembly 2000 in ITU–R Resolutions 56 and 57. ITU–R Working Party 5D was subsequently established to continue the work on IMT. In close collaboration with the relevant national and regional standards development organisations, a yearly update process for IMT-2000 was applied to cater for the evolution and enhancement of the standard. ITU–R Recommendations were also developed to address the implementation aspects of IMT-2000, such as global circulation of terminal equipment, radiofrequency channel arrangements and sharing studies between IMT and other radio services. At the same time, ITU–R Working Party 5D initiated work to address the need for a global platform on which to build the next generation of mobile services — fast data access, unified messaging and broadband >

ITU standards development for IMT-2020 is well underway, along with the associated spectrum management aspects.