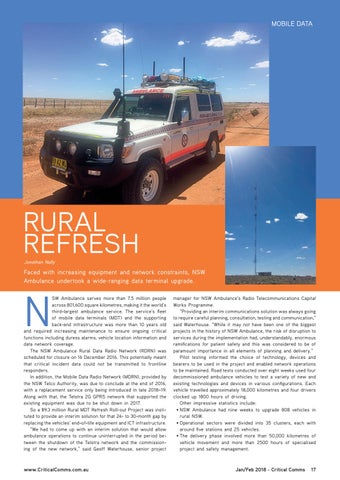 SW Ambulance serves more than 7.5 million people across 801,600 square kilometres, making it the world’s third-largest ambulance service. The service’s fleet of mobile data terminals (MDT) and the supporting back-end infrastructure was more than 10 years old and required increasing maintenance to ensure ongoing critical functions including duress alarms, vehicle location information and data network coverage. The NSW Ambulance Rural Data Radio Network (RDRN) was scheduled for closure on 16 December 2016. This potentially meant that critical incident data could not be transmitted to frontline responders. In addition, the Mobile Data Radio Network (MDRN), provided by the NSW Telco Authority, was due to conclude at the end of 2016, with a replacement service only being introduced in late 2018–19. Along with that, the Telstra 2G GPRS network that supported the existing equipment was due to be shut down in 2017. So a $9.3 million Rural MDT Refresh Roll-out Project was instituted to provide an interim solution for that 24- to 30-month gap by replacing the vehicles’ end-of-life equipment and ICT infrastructure. “We had to come up with an interim solution that would allow ambulance operations to continue uninterrupted in the period between the shutdown of the Telstra network and the commissioning of the new network,” said Geoff Waterhouse, senior project

manager for NSW Ambulance’s Radio Telecommunications Capital Works Programme. “Providing an interim communications solution was always going to require careful planning, consultation, testing and communication,” said Waterhouse. “While it may not have been one of the biggest projects in the history of NSW Ambulance, the risk of disruption to services during the implementation had, understandably, enormous ramifications for patient safety and this was considered to be of paramount importance in all elements of planning and delivery.” Pilot testing informed the choice of technology, devices and bearers to be used in the project and enabled network operations to be maintained. Road tests conducted over eight weeks used four decommissioned ambulance vehicles to test a variety of new and existing technologies and devices in various configurations. Each vehicle travelled approximately 18,000 kilometres and four drivers clocked up 1800 hours of driving. Other impressive statistics include: • NSW Ambulance had nine weeks to upgrade 808 vehicles in rural NSW. • Operational sectors were divided into 35 clusters, each with around five stations and 25 vehicles. • The delivery phase involved more than 50,000 kilometres of vehicle movement and more than 2500 hours of specialised project and safety management.